Ofilispeaks: The True Story of How Intelligence Kills 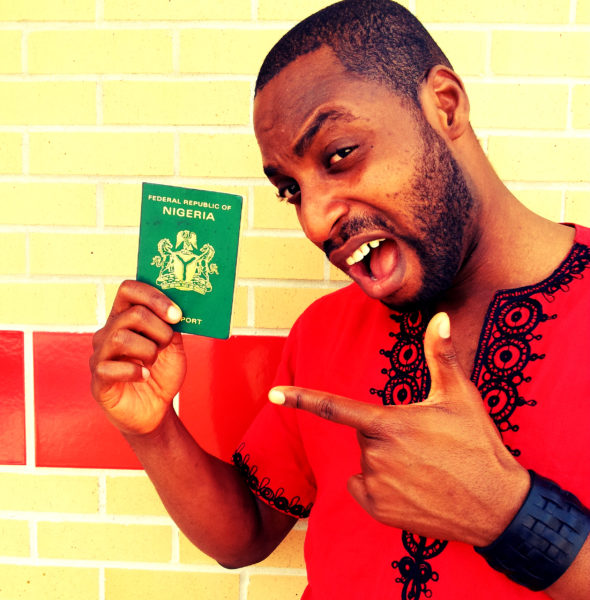 In November 2010, my boss asked me told me that I would be going to Nigeria to execute a project. I would like to say that I was excited at this opportunity, but I was not… I had just bought a house (na mortgage o, no kidnap me) in Houston and my speaking career was just starting to pick up. Not to mention the fact that my parents had been robbed twice at gun point in their Ikeja home and all within a year! I was not excited.

But in 2011 I somehow found myself in Lagos and nothing prepared me for what I was about to experience. And no, it was not NEPA that was the issue or the endless traffic; it was the things that seemed normal to me just 10 years ago, right before my Dad smuggled me out of the country to avoid the endless University strikes. Those things now seemed peculiar.

It began with church. There was a church at every corner of Lagos and Port-Harcourt that I went. People prayed before they did anything, it was prayers, prayers and more prayers. It had been a while since I had been in a 1 hour prayer session, I fell asleep and woke up and we were still praying. We prayed for our Pastor, for jobs and we prayed for the country.

We always prayed for the country but, somehow, it seemed the prayers were not translating. Nigeria was as disjointed as could be, and most annoyingly people blamed this issue on the Devil. Everything was the Devil’s fault or in the recent words of our Aviation Minister as acts of God cue Stella. Very few people took responsibility for their actions. And pastors…let’s not talk about those.  They were like mini-gods. Pastor this said this and pastor this said that and pastor this said that he would give a robust response…cue Ese Walter. This bothered me, so I wrote about it …I wrote about how Religion Kills common sense.

And then there was our educational institutions. I had spoken at several University campuses and Secondary Schools across the nation and there was always one re-occurring theme – actually two. The first was that most students hated what they were doing and the only reason they did what they did was because of their parents. They hated it so much that some students would come up to me crying about the situation! “Why don’t you switch?” I asked most of the time and it was almost the same answer, “you don’t understand my parents” and “my parents will think I am stupid.” Off course, they will think you are stupid. If you don’t like what you are doing, you probably will suck at it.

In the words of Einstein “if you judge a fish by its ability to climb a tree, it will live its whole life believing that it is stupid.” But that is what our institutions and our parents have become. We push our children to climb trees when they should be swimming through lakes. So again I wrote…I wrote about How Intelligence Kills dreams.

There was the second part, where students and church members (for the times I spoke in church) would tell me about issues of abuse. The first time I heard it, I penned it down as an outlier, a rarity. But then after hearing the same issue recounted by different people, I began to realize that there was a sexual abuse epidemic in Nigeria but no one wanted to talk about it. Maybe they did, but behind closed doors, because family pride and cultural pride will not let the stories go beyond the house. So most people, mostly girls, kept these things deep inside of them and it affected them -their demeanor, their personality…their everything.

I remember a friend of mine who in Secondary school, fell in love with a boy (teenage love). She followed him home during a short break at their private lesson. Unknown to her, her teenage lover had other things on his mind. It was a gang rape set up. Luckily or ironically, one of the boys in the gang rape plan knew my friend and could not go on with the plan. But that did not go down well with the other horny guys…they wanted to carry out their mission. So they fought each other tearing clothes and breaking bottles, causing commotion. Luckily nothing happened to my friend. But in Nigeria news travels faster than light (well, we never really have light to begin with) and it was no surprise that the whole town had heard about what happened.

Eventually the news reached her father. He was angry, he  stripped her down, tied her to the balcony railing and beat her! Can you imagine what is going through the head of a young girl at this moment. The one she thought she loved…gang rape. The father that should protect her – public flogging. But this is just a fragment of the stories I have heard. The stories never really come out…time and time again, the stupidity of family pride and respect rears its head…so people keep quiet. But I wrote about it…I wrote about how Cultural Respect Kills.

All I had were writings, articles loosely strung together and some sketches.

But then it happened. 4 days after my birthday on October 5th “ALUU4.” To this day, I don’t know why that incident affected me so much. Maybe it was because they were students the same age as my brother. Maybe it was because I saw the look of helplessness on their faces…that same look that I see in the faces of many of us Nigerians as we waddle through life. Maybe it was the pain in the voice of Lloyd’s mum as we talked in Port-Harcourt. Her pain, her anger…her loss. Maybe it was the way the government kept silent on the whole matter. Or maybe it was the fact that hundreds of Nigerians…educated, religious, culturally disciplined stood and watched as it happened.

And I realized that I like many had stood and watched for too long. We watched as some churches brainwash a congregation with spiritual fear; watched as an educational system defines brilliance as a student with a great memory equipped with a science related degree; watched as older people with bad ideas shove it down our throats cause no one wants to speak up…it’s disrespectful they say. So I wrote…

I wrote my most personal book. A book born out of years of frustration. A book that is not polite or cute. A book that does not beat around bush but sets it on fire and digs out the ashes till the bush is gone. A book that talks about what we all think about but are too afraid to write. An honest book.

I am not sure Nigeria will accept this book. My Dad has made me take out some paragraphs to make it more palatable. But we agreed at the end of the day that we needed to keep them in there. Because it is the truth. And I need your help to spread the truth.

The traditional print a book and dump it in a Nigerian bookstore, will not work. Trust me I have tried it before, you don’t get paid and you get frustrated. You don’t believe me? Then see this incident.

Basically, I want to by-pass the bookstore middle man and get the books directly into the hands of as many Nigerians as possible at an affordable cost (N500 or even less). To do this, I have put the book up on a Kickstarter project. For those of you not familiar, Kickstarter is a way for independent creatives to get funding for their ideas. If we can get to our target goal, we can print 2000 copies of the book at a really low cost so that more people can read.

If you are interested in driving down the cost of books and beating the middle man, then check out our project link at http://bit.ly/intelligencekills. Also note that all rewards are available to everyone no matter your country. Do check out the link and help spread the word. Every Dollar, Naira and Tweet counts!

“I confess that this book will be one of the most candid and honest books you would have read in a long time. I advise that if you are not ready to get your head smacked with the book, you should not read it it, ‘cause it would change your perceptions about a lot of things…”

Some Excerpts From The Book 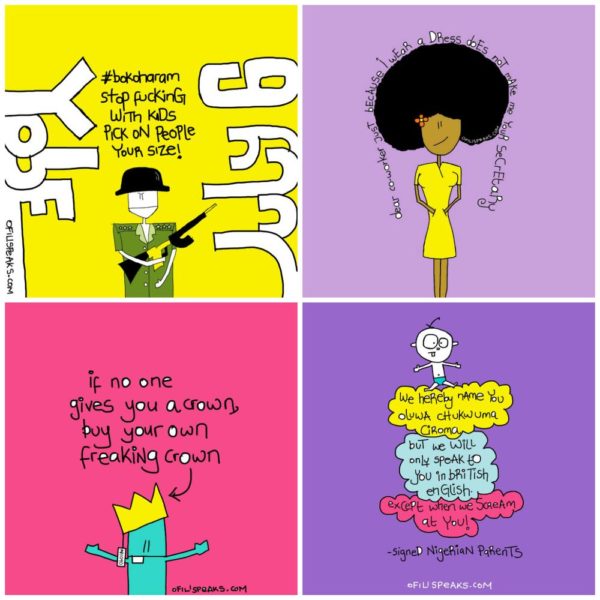 On Religion “Three years later, I found myself several thousand miles from secondary school at a church in Houston, Texas… and my scary spiritual dreams? Well, they suddenly disappeared. It was as if the Devil and his whole crew of demons were denied visas at the American Embassy. And I can totally relate to that…” click to beat the middleman

On Gay Marriage “I confess that I don’t see the big hoopla around gay marriage. I mean I could care less what two consenting men do behind closed doors. Except if the men happen to be politicians deciding how to steal “our”…I take that back…Niger Deltan’s oil money. I confess that I am less worried about two men screwing each other and more worried about a politician screwing an entire nation…over and over again!” click to support

On Education “The fact is that our road networks, like our educational systems are built on a system of memorization; you either know the directions or you don’t. There is no logic to navigating the roads…if you get lost…ask for directions or ask jeeves I mean Jesus. But in the western world, if you ask for directions, you are told to head north or south and then to take exit number X or Y. Even the exits are numbered according to the number of miles between exits. It is a very logical system…their roads were probably planned by people who sucked at memorizing.” click to support the book

The book is dedicated to the victims of the aluu4 mob lynching. “hundreds of people…intelligent and religious stood by and did nothing…and still people have done nothing” hoping that we (not the government) start doing something… 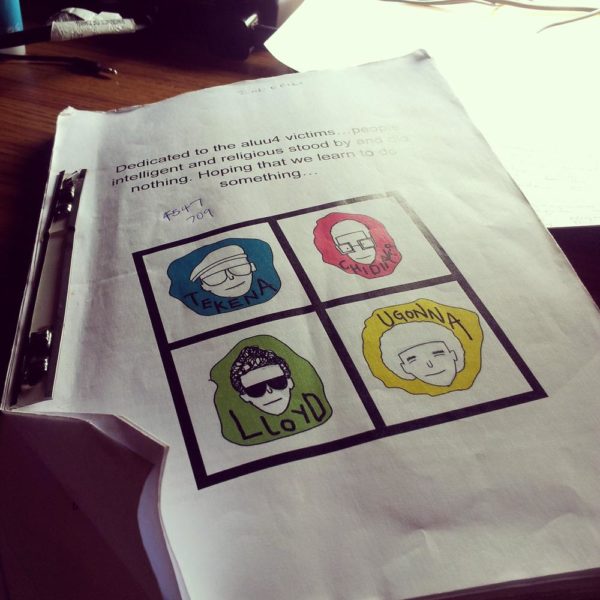 “Why Wouldn’t I Leave Nigeria?” – Watch Kola Olaosebikan’s Video on Why She Prefers Repping Naija From Afar