"She Was My Real Love..." Governor Adams Oshiomole on Why He is Yet to Re-Marry 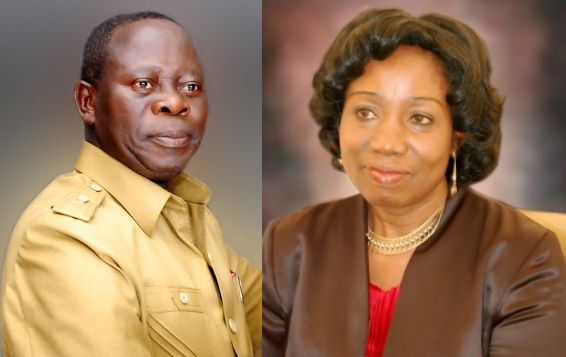 In December 2010, it was widely reported that the wife of Governor Adams Oshiomole of Edo State, Clara Oshiomole is dead.

Clara Oshiomole lost her battle with cancer and died at the Abuja Clinic, Maitama on Tuesday 7th December 2010. She was 54 years old.

Ever since then, Gov. Oshiomole is yet to re-marry. To celebrate 5 years of good governance in Edo, he had an exclusive sit down with Punch Newspaper.

He spoke on his opponents, the ongoing ASUU strike, and his take on the Anambra election taking place today.

The one question he wished the reporter had skipped was that on his wife. But he gave a bitter-sweet account on why he is yet to get married again.

I wish you would have avoided the question because really when I talk about my late wife, people may not understand why? You are in a position to judge whether to agree or disagree. When a man in my own case has the privilege of being elected as a state governor or president, your wife’s status changes automatically to the first lady of the state or the country with all the glamour that goes with it.

To have the kind of wife I had, who was familiar with all the police stations in Kaduna and outside, and sometimes searching for her husband who might have gone to work and detained by Police on account of trade union work, it was her lot to stand by me and she bore all the deprivations of a husband you were never sure where he was going to be at the next minute. At a point, she called me an absentee husband.

In one interview she said “I have donated my husband to the Nigerian workers”, so she went through all that pain and the day we were inaugurated is usually the day where women put on their very best, befitting a stature of the first lady of a state. But on that occasion, we discussed how to appear  because we didn’t have the opportunity of long planning.  I was declared on the 11th as the winner of the election and was to be sworn in on the 12th.

So I said to her, I can’t change my identity now because I have been a worker and have used khaki as a factory worker and President of the NLC, and I don’t want to look different and she agreed. Rather than going to buy lace, she opted to wear the same khaki, except that my own was better sown than hers because the woman who made her own was not used to sowing khaki for women.

So I looked around and imagined that she should have been by my side today to share the joy of my 5th year anniversary. If you come from my background, any woman who agrees to marry a man who is not rich, a man who alternates between police stations and cells and lives in a one or two bedroom apartment, that is your real love.  When my wife said I love you, it was from her heart.

I just imagined how she would have felt seeing all these people. The only worry she  ever had was  who was going to employ our children owing to my agitations with big establishments, because as an organized labour, when we leave the NLC,  we fear that our lives would be lonely because it would be a payback time for all those big people I have harassed in the course of my work. So, it would have been joyous for her to see that five years down the road , I have more people around me than I have before.

Her second fear was that she never approved my involvement in politics because she was very proud to be referred to as the wife of Oshiomhole because then she gets all the favour and saw the affection because most Nigerians were happy with my stewardship at the NLC.

She was worried that once I get into politics, I would be ridiculed and all of that would go. She felt I should keep the name. But I told her even before I went into the NLC. NLC was a write off as military apologists, the human rights community distanced themselves from the NLC and I said you can always chose how you want to be remembered; that I’m going into politics to redefine and demystify governance and reconnect with the very ordinary people and politics offers that platform for anyone who believes the ordinary man deserves a better deal.

So for all that and for many other reasons, that is one thing that I regret that she should have been there to also see the other side of life. I have seen it all, in this state now, they are people who  will call me the oppressor and you know who they are, the oppressors of yesterday.

If you ask ‘Mr fix it’ who I am, he will tell you I’m oppressing him because I have de-fixed him. It would have been nice for my wife to see life’s full circle; that those guys who feasted on us and cheated, that we have reduced them to political vegetables and placed them on permanent political oxygen.

Kaffy’s Beau Joseph Ameh is Now a Musician! Listen to his Song “Number One”