The Flying Doctor: The Myth of the 'Runz Girl' 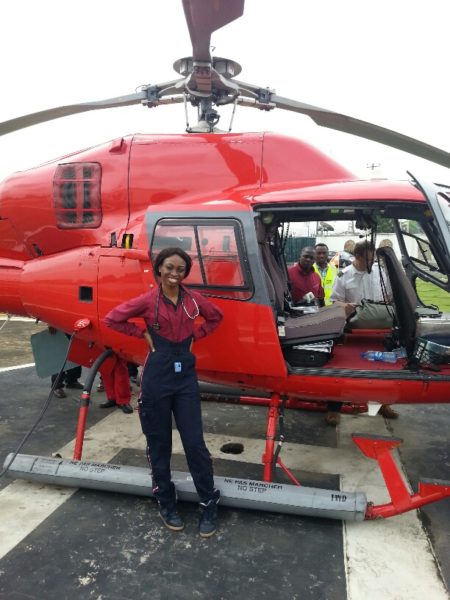 Last week I was doing some business in Port Harcourt staying at the Presidential Hotel. After my dinner, I tried to go back to my room, but the security lady at the lift stopped me saying that she had to confirm with the ‘owner’ of the room before I was allowed upstairs. She proceeded to place a call to my room on the intercom to take permission from the ‘owner’.

It took me about 10 minutes to explain to her that I was a female on a business trip with three of my staff staying in the hotel and that there was no ‘owner’ except me, the owner/founder/CEO of the company that was paying for my room and three others. She looked like she had seen a ghost. She seemed not to be able to comprehend how I managed to own my company and pay for my own hotel room.
As we conversed further she told me how difficult she found it balancing her work as a security guard in a large hotel with being a mother of five. Her husband had not worked in 3 years. She was surprised that I was not a ‘runz girl’.

A ‘runz girl’ is basically as woman who enters into a relationship with financial gain as major motivation for being in that relationship. Many Nigerian women are often stereotyped as ‘runz girls’ especially when they are successful. Some of the most successful, hardworking Nigerian women have been called ‘runz girls’ or former ‘runz girls’. But in actual fact, as much as we talk about how many ‘runz girls’ there are in Nigeria, I have never met one. I believe the whole ‘runz girl’ phenomenon i.e that Nigeria has been overrun with such women, is a myth solely formulated to make women feel small, regardless of their achievements.

Nigerian women package their men better than Proctor and Gamble package products. Many women will claim their husbands work in or own a particular company, when he has really been unemployed for years. Most of these women will do anything, including lying, to make sure their men look good on the outside.
My company; The Flying Doctors, offers support to clinics/hospitals across Nigeria. I was interested to learn that the men in certain regions do not work at all, but stay at home or in beer parlours, sending their wives out to labour on the farms.

Women also contribute significantly to the agricultural sector. For example in Delta, female farmers constitute 70% of the agricultural workforce and produce 80% of the region’s food.
The term ‘gold-digger’ has always been attributed to women. But many of the weddings we read about are between a man and a wealthier woman! I openly hear lots of men talk about how they would love to marry a certain Governor or Senator’s daughter because of the contracts that they can get. But why has this not birthed a ‘runz boy’ phenomenon? Why are these men so rarely referred to as gold-diggers?

When I showed some of my closest Nigerian male friends this article, I thought they would find it infuriating. But instead they recounted the most inspiring stories of their hard-working mothers who were bold and entrepreneurial as the financial heads of their households.

Nigerian society looks down on single mothers deeming them ‘irresponsible’. But the single mothers that I know usually shoulder a lot more responsibility than their married counterparts. From running the household, cooking, cleaning, school fees and myriad of other responsibilities which even two people struggle to handle.

Women are natural fighters. During the military regime in Nigeria, it was women like Mrs Funmilayo Ransome-Kuti who led the voices against the oppressive government, bold enough to risk her life for her cause. How many men were bold enough to walk in her shoes? During the civil rights movement, it was women like Rosa Parks leading the fight for change. Parks was not the first person to resist bus segregation. Others had taken similar steps in the twentieth century, including Irene Morgan in 1946, Sarah Louise Keys in 1955. Both other women!! Even in North Korea today, it is the women that are at the forefront of business in marketplaces across the country, risking death to feed their families. Throughout history women have been standing up against oppression and taking action on the issues that many men just talk about.

The myth of the Nigerian runz girl is so pervasive in this country that even other women have started to believe it. It is a dangerous myth that tells Nigerian men that any successful woman has gotten their wealth from men. It also tells the young Nigerian women that any financial success must come from being sexually appealing to men. This, of course, is not true. Wealth comes from the kind of hard-work, determination and sacrifice that most human beings both men and women will simply not make.

In today’s Lagos, many households have female breadwinners. Contrary, to the ‘runz girl’ myth, a great number of men make relationship decisions with potential financial gain as a major factor. There are probably just as many runz boys as runz girls.

This article is dedicated to the hard-working mothers, who will continue to work till their skin blisters in low paid jobs to provide for their families whilst a runz boy husband sits in a beer parlour all day taking the credit. You are appreciated.

This article is also dedicated to the thousands of innovative women across Nigeria that have built profitable, businesses from scratch with few resources whilst bringing up large families. You continue to inspire me.

To the millions of women like the security guard in the Presidential who have been convinced by the myth that majority of successful women in Nigeria, do some kind of ‘runz’.  It is simply not true. Believing it, weakens us as women. It destroys our self-worth and confidence. Nigerian women, like most women across Africa are some of the most resilient, hard-working, resourceful women I know. They strive despite all of the odds: high rates of rape, domestic abuse, and patriarchal societies, to make sure they put bread on the table for their families. This may mean walking miles in the sun to their farms, spending days fuelled by caffeine in libraries or waking up when most are asleep to start selling goods in the market. Women are the backbone of developing communities. This is certainly the case in Africa. Statistics show that the average man reinvests about 30 percent to 40 percent of his income into his family, whereas the average women reinvests 90 percent. They are our mothers, our sisters, our best-friends, our bosses and our children. They should be afforded the respect they deserve.