"Yes, It Will Bleach Your Skin..."! Dencia speaks to Ebony Magazine on Whitenicious 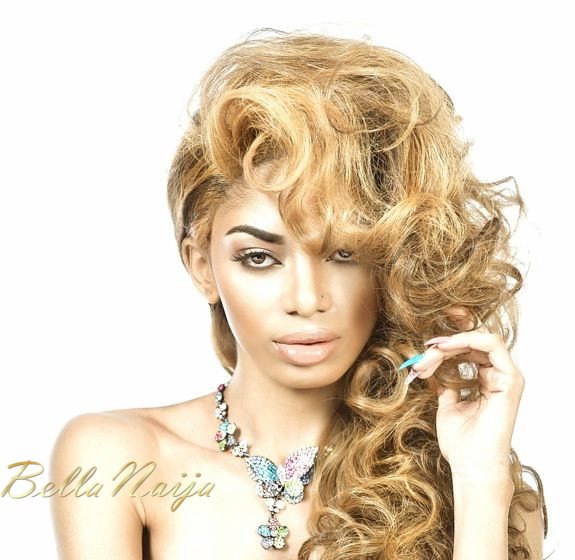 Believe it or not, Dencia‘s Whitenicious is taking her places.

Not only are Nigerians buzzing – be it positively or negatively – about her skincare line, the African American community is also zooming in on it.

Ebony Magazine, one of the most celebrated African-American publications, recently scored an interview with the Cameroonian pop star. And of course, Dencia is defending her product line by setting the records straight on bleaching.

To read the full interview, click here
Read excerpts below;
On if dark skin is an obstacle: “No. Dark skin is beautiful.  Actually, I will send you pictures of when I was 16. I’m not that lighter from when I was younger, I’m not. The picture they’re passing around where I’m wearing the animal print underwear, that picture was three years ago and that was a tan. If anybody looks at that picture and you look at the oil on my skin, you would know it’s a tan. And it’s funny because one of my friends who was at the photo shoot with me that actually oiled me up with the tan sent me a message yesterday. She was like “Why are people going crazy about this picture when you were tanned on this picture?” I was never that dark in real life and I can send EBONY pictures of me when I was like 15, 16. And guess what? I don’t even care because they’re bringing me business. Because when you take that picture and you put a picture of Dencia darker, this is what you’re telling people – the product really works. And guess what? People really want to buy it.  It’s what it is. I don’t really care.” 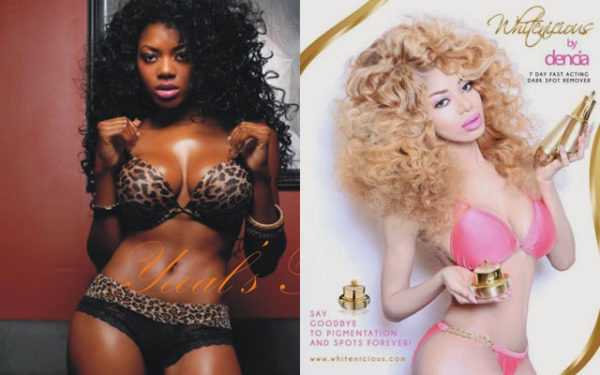 On if she bleached: “Have I…Has my skin lightened from when…like from the past five years? Yes it has. It has. Has it drastically lightened? No it hasn’t. Is it what people are saying? No it’s not.”

On if people will buy to bleach: “Ok. Will Whitenicious bleach your skin if you use it on all your skin? Yes, it will.

On if the success of the line is because people want to bleach: “No, that’s not how I see it. This is how I see it. Everybody that has something negative to say, 1- doesn’t need it and 2 – don’t have the money to buy it. First of all, let me clear this up. As of now 80% of people that buy my products are African American. It’s not Africans. People are saying that it’s Africans because they think I live in Africa. I go back and forth but I live here. I can send you the stats – it is African Americans. I have to be honest with you – I have TV personalities buying Whitenicious for over $1000. People who work for TV stations like Fox.

I have celebrities buying Whitenicous and all of these people are African Americans, they are not Africans. My African market is just 10% because guess what? They don’t have credit cards to buy the products and I’m only taking credit cards or PayPal. And they don’t have that access, do you get what I’m saying? It’s these people that can access that.

Now, my other 10% is White people – I have White people from Europe, America, and everywhere buying Whitenicious. Now, I’m thinking to myself, what do they want to do with it? Of course they’re not trying to bleach their skin. Are Black people trying to get White to be accepted in society? No, I don’t think so. Now I can’t speak for everybody but first of all, White people love the darker skinned Africans. They like the African that is Alek Wek. There’s no in between for them. It’s extreme. You’re either at A or you’re at Z.

On Whitenicious causing cancer: “But guess what? The air you breathe outside causes you cancer.  Everything in the world causes cancer.”

On the before and after photos: “I’ve always been a beautiful girl. It didn’t matter if I was Black, White, yellow, blue, green. I have always been a very beautiful girl. It didn’t matter. Do I look more beautiful than I was before? Did I look more beautiful before than I am now? No. My beauty is who I am inside and out. It’s what is in my heart, it’s what I do for people, [and] it’s what I read in the Bible that makes me a better person. Do you get what I’m saying? I read the Bible a lot and I don’t see any place in the Bible that says that “If you bleach yourself, if you change your skin color, it’s a sin.” I have never seen that so please, if you’ve seen it let me know so I can go read that part of the Bible.”

On if the skincare line is making her rich: “Is Whitenicious making me rich? Whitenicious is putting money in my pocket but it’s not as much as the money that I have spent being a celebrity.  It hasn’t gotten to that point. Trust me I’ve made a lot of money off Whitenicous in 3 weeks. A lot of money. A lot of money that I didn’t even expect. And I’m using it to build an orphanage in Cameroon. I’ve always wanted to build an orphanage but the only way that I could really realize this project was by starting a business. And then Whitenicious fortunately happened.”

On the backlash: “No. No, I do not. I have more important things going on in my life. I have my health, I have my career, I have so many things. I have an orphanage I’m trying to build. Where do I have time to sit and think of these people? I don’t. Because I don’t really feel bad about everything you guys are saying, I don’t.  Because “she, me, her I don’t care” in my Tamar voice.

You guys talk sh*t about everybody. You guys have said too much sh*t about Beyonce, Nicki Minaj, Rihanna, but guess what? They’re winning. They’re at the top of their game. Why don’t you just see that what you’re doing is not helping you or them and just try to better yourself and be successful and bring out something. Instead of sitting there and bashing Whitenicious how about somebody bring out Blackenicious? Then we’ll know that you’re doing something instead of being ignorant. So keep talking. I don’t care because my sales are skyrocketing.

They have all these stories talking so much s*it and it’s funny because people come and they’ll tweet, “Where can I buy Whitenicious? I just read about it on Bossip.” I take negative and turn it into positive.”

On Whitenicious’ success: “You know what? It’s God. Honestly, I don’t know. Like I can’t even explain. I think its God. Everything I touch turns into gold. And it’s not just today. I have run businesses before. My first I was like 15. I had a hair salon and a clothing store. And it was really successful. I just think some people are born to be what they are. It was really successful. And if you believe in yourself and you believe in something and you pray to God to make it successful it’s gonna happen.

But my clothing line is still gonna come out, my shoe line is still gonna come out. I just do it exclusively for celebrities.  I have a really big project I’m working on in America. When that project comes out, I’m gonna be able to market the other things that I have but for right now Whitenicious is a better market. Whitenicious markets itself. I don’t need to do nothing.”

Police Officer Requesting for Dollar Bribe has been Arrested