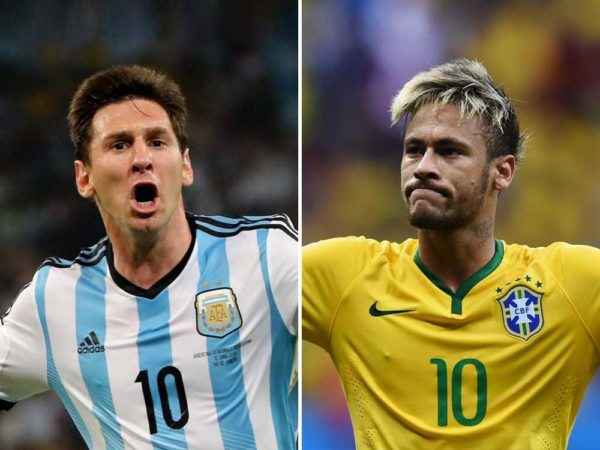 Before the start of this tournament, if I had been asked to name the teams to make the round of 16, I’m sure countries like Costa Rica, Colombia, Algeria even Greece wouldn’t have made my list. But to show the beauty and dynamism of the round leather game, here we are expecting more exciting upsets from them.

Brazil Vs Chile
With the hosts as favourites to win the trophy, one couldn’t have picked a more trendy choice to give them a run for their money in the round of sixteen. Though unfortunate that two South American teams meet this early, it will be an incredible atmosphere and compelling tactical battle. With a shaky defence and their top striker not having the best time in the tournament, Brazil has to compact when chasing the ball to reduce the space the Mexican playmaker Arturo Vidal and Alexis Sanchez will seek to exploit on the counter.

Colombia Vs Uruguay
With their new talisman James Rodriguez, Colombia have the best opportunity to exploit the instability the Luiz Suarez saga has brought to the Uruguayan camp. Uruguay has to find another source of motivation with Suarez suspended.  They will have to revert back to Diego Forlan or perhaps play Christian Stuani off Edinson Cavani in the forward line. But we all know Forlan isn’t the same talented man he was four years ago and can’t give them what Suarez offers. Uruguay will soak up pressure and counter-attack when possible as they did against England and Italy in the group stages. But countering Colombia is near-impossible, as they leave six back and field two defensive midfielders who guard the back four first and foremost. Without Suarez, la Celeste might not move to the next round.

Netherlands Vs Mexico
With Ochoa in goal for the Mexicans, the high scoring Dutch team has met a befitting match for their prolific attack.

So far in the tournament, the Dutch have attacked superbly and they have conceded only once in open play – Tim Cahill’s jaw-dropping strike in the 3-2 win over Australia. Robin van Persie will be back after missing the game against Chile and the Mexicans have an extra man to worry about in the Dutch attack. Wesley Sneijder playing behind Robin van Persie and Arjen Robben might prove too much for the Mexicans. But Mexico not only be aiming to produce a highly-polished rearguard performance, they will counter-attacked with some menace.

Costa Rica Vs Greece
Many believed that the Costa Ricans would be the ‘whipping boys’ of Group D and anticipated they would frustrate one of their more illustrious group opponents through their use of an extremely deep back five and a well-organised, industrious midfield line. The Ticos have however surprised everyone by finished on top of the table and eliminating the likes of Italy and England on the way up. Greece broke the hearts of a billion Africans when they eliminated the most promising African team in the tournament, Ivory Coast, with a last minute penalty shot to boost their morale to great heights. Though it will be a tight game, with forwards like Joel Campell and Bryan Ruiz, Costa Rica seem to possess the essential firepower to knock the Greeks over and proceed to the next round. Neither country has ever made it to the quarter finals, one of them definitely will now.

BN Health & Fitness: Enjoy Your Work Out with Adagurl

Turn Down for What!? All the Fun-Loving People & Pics from the Latest “Grill At The Pent” Party