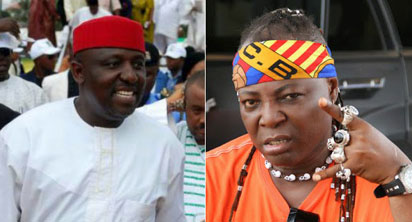 However, according to reports, the service didn’t go too smoothly. Charles Oputa, a.k.a Charly Boy, the first son of the late Justice prevented Governor Rochas Okorocha of Imo State from paying tribute to his father, Vanguard reports.

While Okorocha was giving his tribute speech, Charly Boy allegedly stopped him midway into the speech.

“He walked up angrily to the altar and snatched the microphone from the governor,” states reports.

The Bishop presiding over the event reportedly tried to intervene, however; Charles was irate and reportedly stated that he wouldn’t allow any politician to use his father’s burial to “score cheap political goals.”

The Governor and his entourage were said to have left the church service abruptly after the incident.

Sources reportedly revealed that Charly Boy’s actions stemmed from a recent statement by Government House, Owerri, to the effect that the Oputa family was given N20 million to help with burial arrangements.

Sources however revealed that “the family never received a dime from either Okorocha or the state government, not to talk of the alleged N20 million said to have been made available to them.”

In the aftermath of the incident, Sam Onwuemodo, Senior Special Assistant,  to Governor Okorocha released the following statement (excerpts as reported by Vanguard):

“It is highly regrettable that the son of the late Justice, Mr Charles Emeka Oputa, aka, Charly Boy, threw caution to the wind and turned the church service into a political theatre that saw him acting or playing out the script he drafted in Abuja with some Imo politicians, who have remained cowed by the overwhelming popularity of Governor Rochas Okorocha…

We condemn that ugly incident and also wish to advise politicians from the state to stop heating up the polity over power since God is the giver of power. In 2015, God will decide who will be governor of Imo State and when God decides that, there is nothing anybody can do about it…”

The statement is also said to contain assertions that the Imo State government gave “a substantial financial input” into the burial.