So, this happened last weekend. I had gone to a basketball game to watch my friend play. I was seated in the corner (like a good girl) just watching silently. It would seem to an onlooker that I was deeply engrossed in the game, but my mind was harassing me (again). She wailed about me making her watch grown men in baggy shorts run haphazardly within a court – only to take comical leaps to slam a poor ball into a hanging net.
I ignored her and tried to refocus on the game. It was quite enjoyable to watch, and I was having a good enough time. A good time truly, but not quite as good a time as I would have had, had I been watching American football which is a personal favorite of mine, not because I particularly understand the game, but simply because it fills me some perverse amusement to see grown men run around in really skin-tight tights. Something like seeing Spartacus run around in spanx. I tell you… it is VERY enjoyable to watch. I spend the entire duration of the game wide-eyed and giggling like a rabbit high on sugar.
‘‘Naughty, naughty you,’’ I admonished myself as I went even further and envisioned Spartacus in tights. It was a deliciously wicked thought, and the image made me chuckle out loud.
I didn’t realize I had attracted attention, till I saw the guy next to me beaming at me. Waowww, he was kinda cute. I quickly turned my eyes away from him (bad habit, I know. I always worry about people reading my eyes… that whole the eyes are the windows to the soul thing). But somehow, somewhere, one measly second of eye contact must mean invitation to this guy, as he slid over like Michael Jackson on a bench and then said to me…
“Hey, wassup gyal? Is like yuu live around here yah? Yeah mehn, dazz mai ‘ood rai de mehn, yuu dig? Waow, so buriffful. I wanna gerra know yuu berra.”
This was what I heard…
“Gbosa gbosa gbosa yam yam yam wanna-gonna-canna, piam piam piam.. *insert mosquito buzzing sound for good measure* gbishaun!”
I winced and grimaced a silent “Why me Lord?” to the heavens. I sighed heavily, in advance of the coming moments I knew I would have to endure so as not to be considered rude and/or bruise his ego.
Unperturbed, he broke into my thoughts and continued, “So wha’chu say, yo? Yuu gonna come haff sum ber-be-kiew (barbecue) ribs wiff mi en mah niggz lay-ra on?”
I swear, I really tried to speak, but all I could do was manage to squint my eyes at his moving mouth and grimace. He was such a handsome fellow, I didn’t understand how he couldn’t understand how thoroughly he was ruining the experience of him with each mangled word that fell from his beautiful mouth. Each brutalized English word was like a bazooka fired at close range at my face.
All these boys… trying to toast someone with spere-spere English. It is not necessary o. just speak. Walahi, this American-Nigerian- BET inspired English can sound irritating at times.
Wanna-gerra-gonna-comma-berra. Odiegwu.
Seriously, how in the world can anyone think speaking like that is better than a clean and clear Nigerian accent? I am floored that anyone would think this way. Is something wrong with our generation?
I am not talking about having lived abroad and acquiring some kind of accent. That’s fine and probable. Heck, you can adapt your speech pattern and inflection to your favorite movie star, that’s also fine, as long as you speak properly. But you shouldn’t trade your clean and clear Nigerian accent for a mangled version of thick naija flavored hip-hop-Americana English. It is so unsexy. And this guy even made it worse; he kept swinging his arms and gesticulating wildly like he was rapping.
Na wa o.
Honestly, there is nothing wrong with having a Nigerian accent. In fact, I find the accent of a refined Hausa man very sexy. (Emphasis on REFINED please). I love the way it glides and rolls off their tongues. It is not just the Hausa accent. I love the way Femi Kuti speaks and the way Prof. Wole Soyinka speaks. There is something rich, earthy and peculiar about the way we mouth our words. It is true that education and exposure can influence a person’s manner of speaking, but in communication, the importance of clarity and articulation cannot be over emphasized.
Unlike Mr Fine-Mouth-Bazooka-English.
Apparently one of the players had done something he disagreed with so his attention was turned away from me (Thank you Jesus!) He was just talking loudly with his spere-spere English. Gesticulating with his hip-hop moves with his arms…
” Yo mehn! Wo yuu doin mehn! Get daa ball yo! Shieeeet mehnnn, we gonna win diz game, know warram sayeeeen!? Shieet!”
The game continued. I had managed to secure a decent enough space between me and Coach Berra-Wanna, formerly known as Mr Fine-Mouth-Bazooka-English.
My eyes caught that of my friend on the court. He waved at me, I smiled and waved back. I was happy again.
And so my mind drifted deliciously back to more pressing issues; like creating the image of a modern Spartacus in spanx. And I have to say, he was magnificent. Like this kind of magnificent: 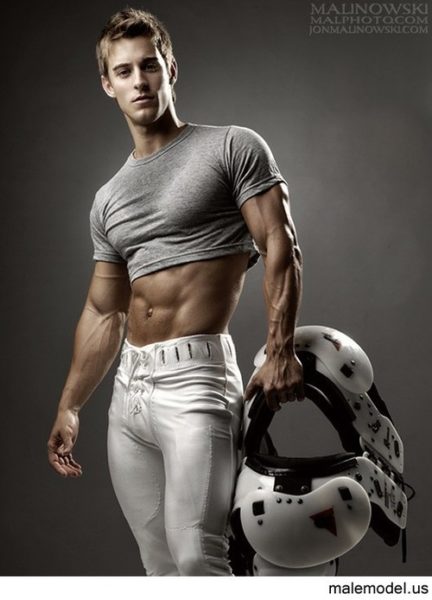 Have a blessed Tuesday my lovelies!
Photo Credit:  http://www.pinterest.com/jirouco/pins/

Let’s Talk About It! Movies on Chibok Girls – Awareness or Profiting from Tragedy?