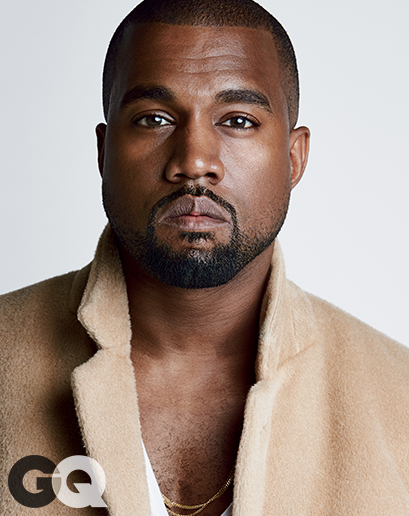 On Saturday, BN brought you the cover of the music star for GQ’s August 2014 issue. Now it’s time to get the deets from the interview.

In true Kanye West style, he talked passionately about race, fashion, music, his relationship with Kim Kardashian, respect and the idea of celebrity.

Fun fact – Kanye West had a 45-minute rant at his wedding to Kim in Italy. The interview was conducted 10 days after the nuptials. 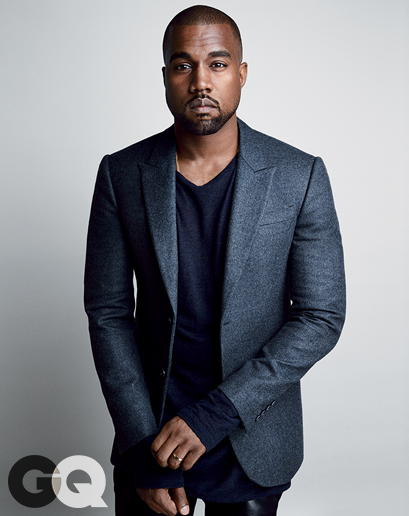 On why critics are mad at Kim K
“…when people try to spoof or talk sh*t, it’s like: But you’re mad because basically Kim is the type of girl that, her entire life, if you were in school with her, most people would be studying and up late nights, but for some reason she would have the skill set to go and grab the one book, turn to the exact page, and just magically say, ‘That’s the exact answer.’ Or she could wink at the person who had done all the work and get it done anyway. And the point of life is getting sh*t done and being happy.”

On him and Kim being powerful together
“One of the reasons why I think that me and Kim are very powerful together isn’t just the concept of celebrity or this mega rap star and this mega-beautiful pop star. It’s something I explain to my girl: She is who she is. I am who I am. We have advisers and friends and everything, but those people are who they are and we are who we are. And what I had to learn from Kim is how to take more of her advice and less of other people’s advice. There’s a lot of Kim K skills that were added. In order to win at life, you need some Kim K skills, period.”

On his decision to marry Kim K
“Saying ‘Hey, I like Kim’ isn’t as inspiring to people as us getting married. And anyone that’s in a relationship knows that in order to get to the point to get married and then to be married and to then carry on, it needs that work put into it. Right now, people look at it and it’s like, ‘Wow, that’s inspiring.’

Meaning that love is infectious. You know, God is infectious—God flowing through us and us being little-baby creators and sh*t. But His energy and His love and what He wants us to have as people and the way He wants us to love each other, that is infectious. Like they said in Step Brothers: Never lose your dinosaur. This is the ultimate example of a person never losing his dinosaur. Meaning that even as I grew in cultural awareness and respect and was put higher in the class system in some way for being this musician, I never lost my dinosaur.

Kim is this girl who f**ing turns me on. I love her. This is who I want to be next to and be around. And then people would try to say, ‘Well, you know, if you’re a musician, you should be with a musician, and if you want to design, you need to be with a girl from the design world.’ I don’t give a f**k about people’s opinions. Because when a kid falls in love with an airplane or a bike or a dinosaur—especially if you’re an only child and it’s not because of the book that the sibling was reading—it’s like, f**k, you mean to tell me that the dinosaurs walked the earth and stuff like that?!

That’s amazing! You mean to tell me that these giant multi-ton crafts can fly that fast and that loud, and they can flip, and there’s danger, the possibility of them exploding? That’s f**king cool! You mean to tell me that this girl with this f**king body and this face is also into style, and she’s a nice person, and she has her own money and is family-oriented? That’s just as cool as a f**king fighter jet or dinosaur! And just as rarely seen.”

On Jay Z and Beyoncé not attending the wedding
“All that, I wouldn’t even speak on. It doesn’t even matter to me whatsoever, who would show up. Because the most important person to show up there, to me, was Kim. And that’s all that matters to me. I had to fight for that for seven years.

It really was a representation of the way we receive information today, post-Internet. And so Page Six can’t overshadow the main point: Carine Roitfeld was sitting next to Kim Kardashian. That alone to me is like the same moment when I brought Mos Def to the studio with Jay Z. It’s about the people, and the fact that they’re from different walks of life, and that they’re working together and not discriminating against each other. There was a class system, and now there’s a creative class system, and I think that’s what you were talking about a bit—the class system of creativity.

… And my point is, they were all at her wedding.”

On his 45-minute wedding toast/rant
“And what I talked about in it was the idea of celebrity, and celebrities being treated like blacks were in the ’60s, having no rights, and the fact that people can slander your name. I said that in the toast. And I had to say this in a position where I, from the art world, am marrying Kim. And how we’re going to fight to raise the respect level for celebrities so that my daughter can live a more normal life. She didn’t choose to be a celebrity. But she is. So I’m going to fight to make sure she has a better life.”

On the wedding photo getting millions of likes on Instagram
“It’s because of Kim. Meaning there’s no photo that I would have put up by myself, or next to one of my smarty friends, that would have got that amount of likes. So now you take this photo that has that amount of likes, and it has a flower wall from the same guy who does the Lanvin shows, and it has a couture Givenchy dress and Givenchy tuxedo in it. That’s the point. Now the thing that is the most popular is also communicating the highest level of creativity. The concept of Kimye has more cultural significance than what Page Six could write.”

Is Lola Omotayo-Okoye Speaking Out on Criticism about the Peter-Jude Okoye Drama?