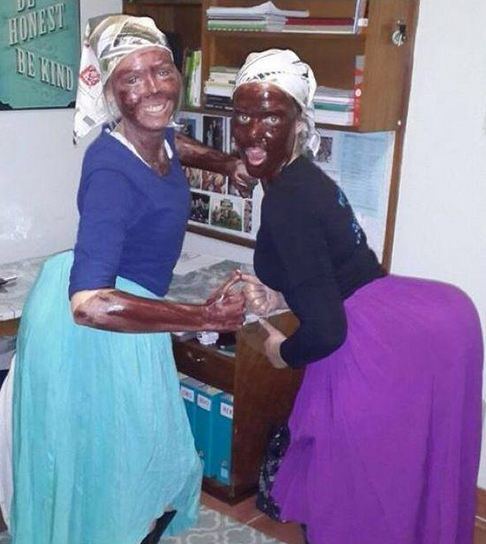 The blackface trend is making the headlines once again.

If you recall, during the 2014 FIFA World Cup, a large number of Germany football fans wore a blackface for a game against Ghana. An investigation was opened, but there was no final statement.

Recently, two white South African students posted a photo of themselves in blackface. It prompted a school disciplinary response as well as reignited a social media conversation on racism in South Africa.

The ladies are from the University of Pretoria, and in the photo, they are seen dressed as black domestic workers. Although it was quickly deleted from Facebook, it has since gone viral on Twitter.

An official for the tertiary institution said that the students would be disciplined for harming the school’s reputation.

Many South Africans have shared their reactions to the photo using the hashtags #blackface and #studentracism.

In the year 2014, South Africa seriously debating if #blackface is racist and offensive or not. I'm defeated.

I understand the difference between art and blackface. A dancer might paint themselves from head to toe in black, red, white etc.

The response to #Blackface is more upsetting than the "normalisation" of this sick practice.

Dear fellow white folk: Don't even try defend this #Blackface garbage. DON'T. This is the reason race relations are at a low in South Africa

So if #Blackface is acceptable, white South Africa…It should be fine for others to wear khaki shirts & plaster flour on their faces,right?

Sad that aftr all that's happened, blacks still have to teach whites that it hurts when they kick them, let alone where it hurts. #blackface

The sad thing about #blackface for me; the woman that are being "mocked" by these white young ladies, raised them…

Would've been "ok" to mock our generation, but to mock someone's mother, the mother who worked tirelessly for peanuts day in&out #blackface

Is it offensive? Yes. Extremely. In fact, it goes beyond the blackface – mock not the domestic worker. #LiveVIPZA #blackface

(2/3) the domestic worker is symbolic of how black needs (& kids) have been subjugated to white needs #blackface pic.twitter.com/k0VispZZlH

My opinion on #StudentRacism , Report on positive Residence intergration, stop fuelling the fire with negativity pic.twitter.com/MBbuoxZ85L

So this #StudentRacism thing… Just remember being offended is a choice.

“She Slapped Me…” Man Explains Reason for Strangling Girlfriend to Death