Today I have a confession to make. I am not over my green chilli addiction. After the sweet version I had to try a straight up hot recipe. So what did my food mind remember? The day I randomly stopped over at my friend’s place. Baby girl had just cooked this “ayamase” stew and there was a fresh pot of steaming hot rice. Guys, I had just finished lunch but guess who decided to “taste” the stew… Yes ding! ding!! ding!!! You guessed right… me! The stew was super. I mean I finished the food before my head remembered to post on Instagram. I think I shed tears of joy that day. It was that good. Of course Dupe refused to divulge her secrets, but I told her, “shift… I shall learn it“. So after much posing and even much more begging and serious toasting she finally gave me some tips on how to make the stew. I never made the stew till one fateful night.

I decided to clean out my fridge and freezers and my goodness there were loads of clams, scallops, pork tenderloin, beef steaks, fish cutlets, shrimps and so on and from Chef Fregz Special. There were also a lot of green chillies for the dirty rice. So here I was with all these ingredients and what to do?

At night my eyes peeped a bottle of palm oil and boom! The above story I narrated came to me and I decided for the first time since 2009 I decided to make “ayamase”. This time with all this seafood I have. So after much coughing and a war zone like amount of smoke, the pepper and onions fried, then the pre-fried seafood things went in. I added a few Knorr cubes and salt. In my case I introduced some ginger and garlic and voila! My stew was ready. It was even a hit with my mum and that was all the validation I needed. 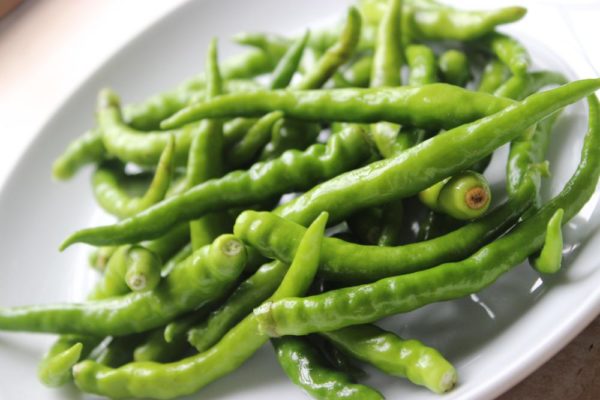 After feeling super confident I made another batch and sent to Dupe saying “Master of Ayamse please try my stew o”. Mehn I won’t lie, that day my seasoning was off and as much as I don’t want to agree with her, she offered some tips to “make it” taste like hers (a.k.a better). Her tips were to season a bit more and boil my ingredients before frying it. So I tried it again, watching out for my seasoning and doing the boiling the pepper before putting it in. I must confess it makes a difference but at the same time I would say my method and hers give a different feel in the mouth. So it’s down to what you prefer at the end of the day. Again, I wasn’t trying to recreate Dupe’s stew, I made mine. It’s my own take on the popular stew. I dare to be different.

You can use whatever fish or seafood you have there are no real rules here. However, if you’re using fish steaks or pieces, I recommend you pan sear/fry it first in some palm oil before you add it to the stew. This is to prevent it from falling apart in the stew. I used some snail in my recipe that went in from the beginning as it would take a longer time to cook. Prawns and things like shrimp can go in at a later time time closer to the end of the cooking time – because those don’t need so much time to cook. 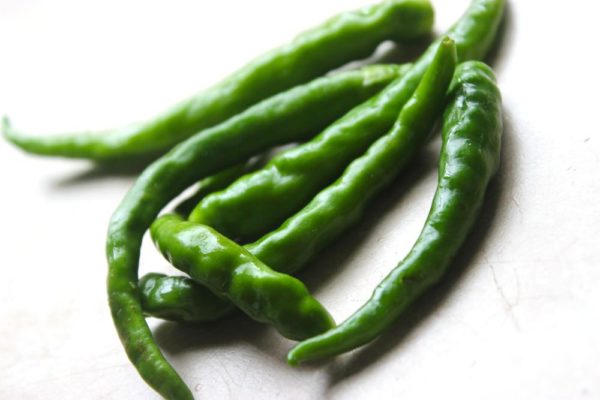 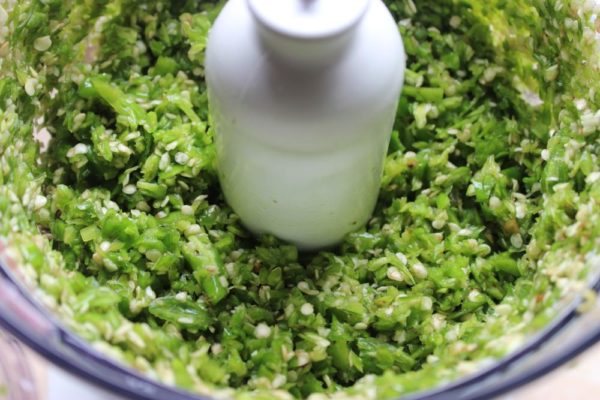 At the time of the shoot I had only what I’ve listed, but the on the accident night I had some clams and scallops. So, feel free to allow your imagination run wild. I don’t advice squid/calamari, because it would go rubbery in the stew.

Before we head into the steps, you have to super careful with the bleaching oil phase. I recommend you turn off your fire alarm and also open all the windows in your house. Even better if you have an open kitchen outside – that’s the best.

Place your oil and leave to heat up on a high heat for about 12-15 minutes or just till you put a piece of paper in it and it turns clear or the colour of regular vegetable oil (without the yellow tinge from palm oil). This belching stage isn’t cute at all. Please if you’re asthmatic or have breathing problems please don’t attempt this. Just get someone to cook it for you to enjoy. Also, please have a glass of water nearby in case the coughing gets too much.

How To
Take the onions and peppers and boil for 10-15 minutes or till most of the liquid has evaporated. On the other hand, you could just fry it straight away and cook for a longer time in the oil.

Take your boiled or raw pepper mixture and pour into the smoking hot oil that has reached it’s bleaching stage. You could do this one spoon at a time, but it’s better you pour in the whole thing at once so it starts to fry all at the same time.

Allow that to simmer away. While that it simmering away. Pan fry whatever protein that you need to – depending on what you decide to use. In this case I have used fish, snails, shrimps. Just know when to put them in. Seafood is usually delicate so don’t treat it like meat that can withstand long hours of cooking. 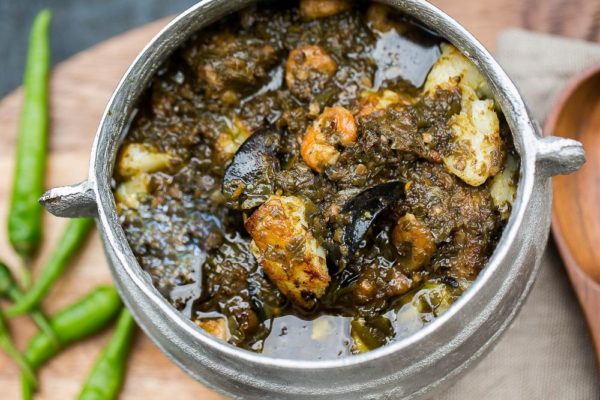 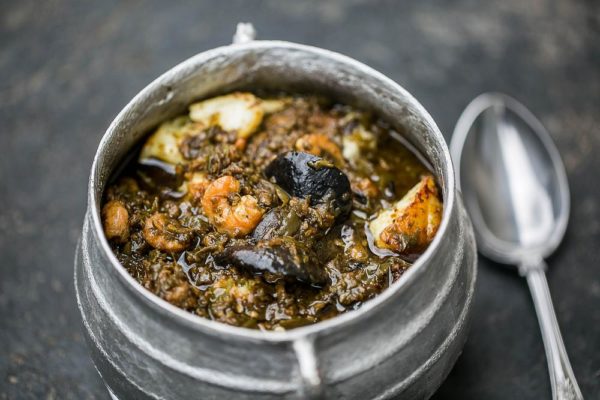 The stew needs to be stirred every other 15 minutes or so scrapping the bottom so it doesn’t burn. The stew would go from a bright green to a dark looking sauce. Do not be worried if it’s looking black; it’s supposed to look dark but taste amazing. Be sure to season at this stage and stir and allow bubble away. At the end check for seasoning be sure to season with salt and not just seasoning cube as salt rounds up the flavour of the whole stew.

The stew take about 30 minutes to 40 minutes to cook. Be sure to lower the heat after the first 10 minutes of cooking. 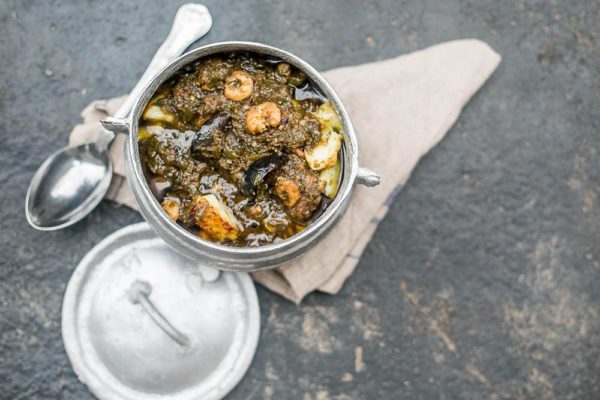 Ground Rice was my side of choice feel free to enjoy yours with whatever you feel like. Rice never fails abi? But try using this stew to make an egg sauce for yam…tres yum! 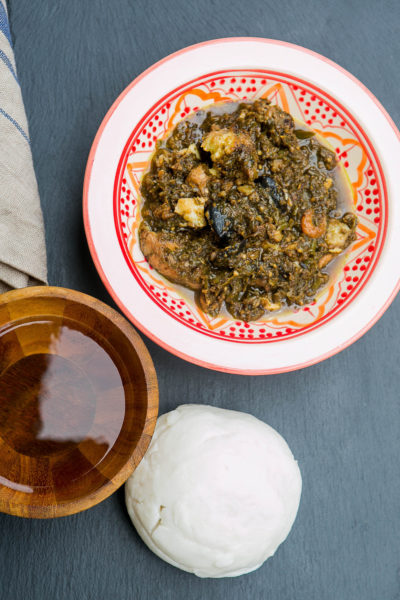 Let me know how yours turned out and whose method you used… i.e cooking out the pepper first before frying or frying straight away.

Before I go, let me quickly mention the cooking class I’m putting together next week, from the 19th to the 22nd of August.  The registration is still open.

The biggest thanks goes to my dearest Beatrice Lawale aka Miss Benedetto of Benedetto Photography and Adebayo Rotilu of Twelve 05 Photography They are the best food photographers in Nigeria right now. Beatrice is London-based but if you have her Aunty Elizabeth she will fly down. Check out Beatrice’s work and be sure to check out Adebayo’s page on Instagram @twelve05photos Facebook: twelve05photography.

Ask FVO!: How Do I Know When an Event is “Successful”?