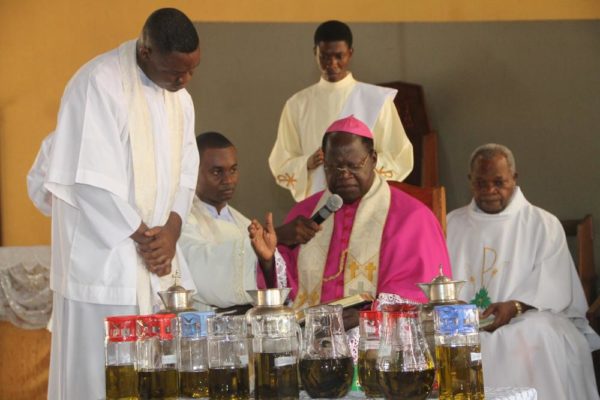 Makurdi (NAN) –  The Catholic diocese of Makurdi, Benue, has barred the faithful from taking corpses of late relations to churches for funeral Mass as a measure to check the spread of Ebola virus.

The diocese directed that corpses of deceased members should be given immediate burial.

It, however, said that it would allow corpses to be brought to the churches in the area only when death certificates issued by relevant medical authorities were produced.

This is contained in a statement by the Director of Communications in the diocese, Rev. Fr. Moses Iorapuu, in Makurdi on Saturday.

The statement, which was issued on behalf of Bishop of the diocese, Rev. Athanissius Usu, also announced changes in two aspects of activities during mass, including the mode of administering the Holy Communion.

According to the statement, parishioners will henceforth be served the eucharistic feast on their hands as against the practice of putting it on their tongue by the priest.

Also, it said, the exchange of the sign of peace, involving handshakes has been replaced with other suitable gestures to avoid the possibilities of contacting the Ebola virus.

The diocese advised priests, who conduct pastoral visitation to hospitals to be cautious and seek doctor’s permission before touching sick people with undisclosed illnesses.

It also announced the prohibition of group prayer sessions that involved touching and praying over unknown sicknesses.

According to the statement, the measures, which are in accordance with Federal Government’s directive on ways to prevent the spread of Ebola virus, are aimed at safeguarding the health of members.

“We hope that with these preventive pastoral and standard procedures and with prayers and steadfastness in responsible behaviours, the Lord will keep this virus away from us.

“We urge you not to ignore government’s advice and other official statements on how to prevent the outbreak of Ebola virus,” it stated.