Julius Agwu says Rivers State Indigenes asked Him to Run for Governor, Hopes to be President 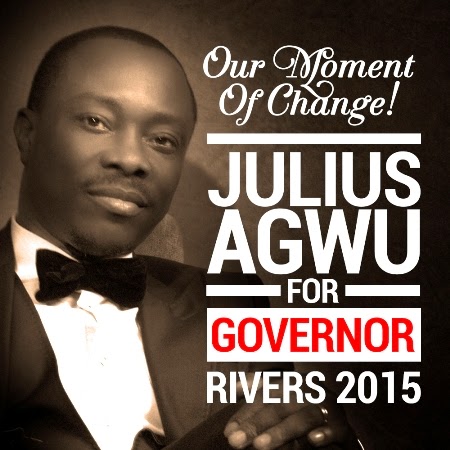 What’s Julius Agwu‘s vision for 2015 – be the next Governor of Rivers state.

Last week, the comedian and singer subtly announced that he will be contesting for the seat of the governor of the state by posting a campaign photo online.

Julius who joins stars like Desmond Elliot, Kate Henshaw and Dan D’Humourous who recently announced political ambitions, got quite a backlash. But he is unperturbed.

In an interview with Vanguard, he explains his reasons for going into politics and what he hopes to change if he wins.
On reports that he is running for governor: “Yes, I am working on that project too at the moment.”

On if he will call himself a politician: “I cannot really call myself a politician, but l am someone who prays and wish for things to get better than it is in this country. I believe I can help to achieve what my brother started in Rivers State. It is a known truth that Port Harcourt was the Garden City of this great country, but we lost that glory because of poverty and neglect, coupled with incessant militancy and kidnapping. Governor Amaechi has done well for the State, but we still need good hands after he leaves to continue the good work.”

On why he wants to be governor: “Becoming the governor of Rivers State was not something that came up overnight. It was not on my radar back then. The people of Rivers State in the Diaspora and those in the State have been clamouring for me to come out as an aspirant. They believe I have what it takes to go for it. It just dawned on me that I indeed have what it takes. I have given it a serious thought and have given in to their pressure.”

On if they’ll sponsor him: “Yes, they will. But I do not want to disclose their names for security reasons.”

On his political party: “Yes, we shall, eventually, but I do not want to unveil that now.”

On possibly running for presidency: “Yes, when the time comes it will be revealed.”