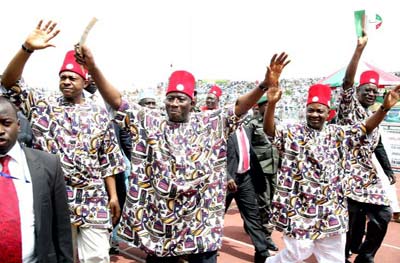 Nwankwo gave the warning during an interview with the News Agency of Nigeria (NAN) in Abuja.

“Basically no political party is allowed to campaign publicly until it is 90 days to election,’’ he said.

Nwankwo, however, said that there was no political party currently campaigning in the territory.

“We are not aware of any political party that has declared their candidates.

“The billboards that are all over the places are from those wishing their person or persons to go for the 2015 general elections,’’ Nwankwo said.

He said that the law had been silent on individual canvassing for people to contest or promote their interests.

“That is why you see all forms of billboards urging for candidates to go for the elections.

“We operate under the armpit of the constitution,’’ he said.

Nwankwo said it was the duty of INEC to register parties and guide them to do the right thing at the right time.