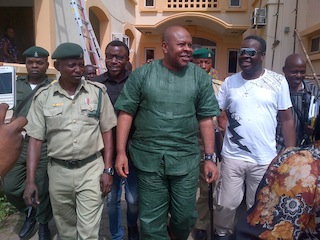 An Ikeja High Court on Wednesday discharged a socialite and businessman, Fred Ajudua, of $1.69 million (about N252.8 million) fraud charge.

Justice Kudirat Jose discharged Ajudua and his co-defendant, Charles Orie, following the withdrawal of the charge by the Economic and Financial Crimes Commission (EFCC).

“The charge against the defendants is hereby struck out. The defendants are accordingly discharged,” the judge said.

Earlier, EFCC counsel, A.E. Sanusi, told the court that some principal prosecution witnesses refused to come to Nigeria to give evidence in the matter.

“Our witnesses are foreigners who are reluctant to come to Nigeria.

“They are citing Ebola virus disease as one of the reasons they do not want to come.

“The first defendant (Ajudua) is at present being remanded in the Kirikiri Prisons; in the circumstances, we are constrained to withdraw the charge.

“We are asking the court to discharge the defendants until we are able to get our witnesses,” Sanusi said.

The defendants were arraigned in 2003 over alleged fraud against two Dutch businessmen – Messrs Remy Cina and Pierre Vijgen.

They were re-arraigned before Jose on February 5th, following the transfer of the case from Justice Joseph Oyewole.

The EFCC had said that the defendants deceived the Dutch businessmen by claiming that the money was for sundry payments to various government officials.

The commission also said that the defendants claimed that the payments would help them to facilitate a contract worth $18 million on behalf of businessmen.

NAN reports that Ajudua is, however, facing another charge before Justice Oluwatoyin Ipaye.

He was charged with defrauding a former Chief of Army Staff, Gen. Ishaya Bamaiyi of $5.9 million (about N1 billion).