When the news first broke of Nollywood actor Desmond Elliot going into politics and campaigning for a seat in the Lagos State House of Assembly 2015, a lot of people were skeptical.

The 40-year-old actor is however not letting that hold him back and is currently organizing a youth interactive session with the theme “Today’s Youth, Today’s Leaders: Our Tomorrow Is Today”.

The actor has also released a new batch of campaign photos, making sure to include his Yoruba name, Olusola. 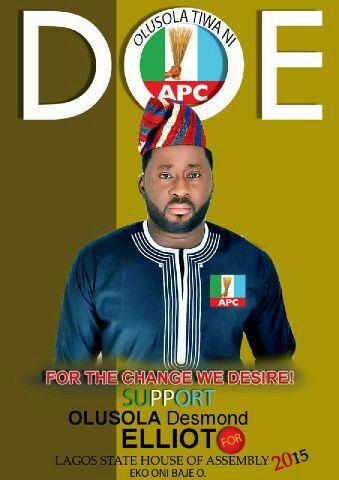 The event, scheduled for Sunday 19th October, 2014, has received a lot of positive responses on Twitter with several Desmond Elliot followers saying they will be present at the event.

Will you be attending?