Shonda Rhimes can easily be described as a TV genius, having created hit shows like ‘Grey’s Anatomy’, ‘Scandal’ and most recently ‘How to Get Away with Murder’ featuring Viola Davis. What she should not be described as is an ‘angry black woman’, which is exactly what the New York Times called her a few weeks ago.

Covering the latest issue of The Hollywood Reporter (THR), the multi-talented writer and show creator addresses the ‘angry black woman’ issue that had social media enraged, as well as talking about her favorite showrunners, her favorite part of script writing, the role of race and gender in Hollywood and more.

You can see more pictures of Shonda Rhimes and read up her full interview and feature in The Hollywood Reporter here. 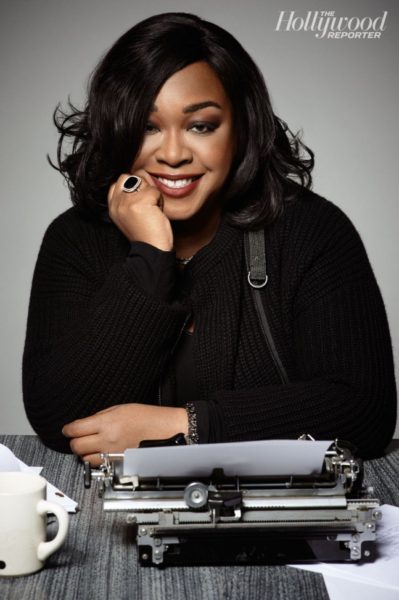 On the article published in NY Times: “Some really amazing articles were written that had the conversation that I’ve been trying to have for a very long time, which, coming from me, makes me sound like I’m just, ‘Rrrraw!’. She continues, “In this world in which we all feel we’re so full of gender equality and we’re a postracial [society] and Obama is president, it’s a very good reminder to see the casual racial bias and odd misogyny from a woman written in a paper that we all think of as being so liberal.”

On being asked how she manages three shows and three kids: “The question drives me nuts,” she says. “What does Chuck Lorre say when you ask him about work‑life balance?”

On how she actually combines work and the home front: “I don’t. … If I am at home sewing my kids’ Halloween costumes, I’m probably blowing off a rewrite I was supposed to turn in. If I am accepting a prestigious award, I am missing my baby’s first swim lesson. If I am at my daughter’s debut in her school musical, I am missing Sandra Oh‘s last scene ever being filmed at Grey’s Anatomy. If I am succeeding at one, I am inevitably failing at the other. That is the trade-off.”

Shonda Rhimes adopted her first daughter in June 2002 and adopted another girl in February 2012. In September 2013, she welcomed her third daughter via gestational surrogacy.

Is It Stealing If Mrs. Takes Money from Mr.? Battabox Asks Lagosians | Watch