#BNShareYourHustle: Magic Box Nigeria is Here to Curate Bespoke Gifts For You & Yours

This month I’ve decided to write a 3-part series called Nigerian Women & Money. One article each week. Part 1 is for the Stay at Home Mum: run your home like a corporation. Part 2 the Single Woman: Be a Boss, Build an Empire. Part 3 Working Mother (9-5er/ entrepreneur): Be Superwoman.

My friend Oyinda once said that in Nigeria, when it comes to managing their finances, most women are raised to go from depending on their fathers to depending on their husbands. I found this quite profound as it meant that in most households, men are taught to hustle hard but women are taught to marry well. This is essentially what Chimamanda Adichie was saying in her TED talk.

However, in modern day Nigeria, if a woman isn’t smart about her money, any sudden life changes could mean an inability to adapt quickly. Unfortunately, women are more vulnerable financially when it comes to divorce, death of a husband or loss of a husband’s income.

I’ll never forget the numerous stories growing up about women with several children who lost their husbands to sudden illness, accidents or other women.

‘Poor woman her husband’s relatives didn’t even wait till his body was cold in the ground before they threw her out of her home, because their brother’s property was now theirs’.

‘Did you hear that Mrs. Bamidele’s husband has married his mistress? He has moved her and the kids out of their Ikoyi home to a self-contained in Eric Moore towers’.

The thing, the women in these stories had in common was being financially helpless, when life threw them a curve ball because they were unprepared. We never think it’ll happen to us but the bitter truth is that sometimes, life happens and it’s important to be prepared.

I heard an incredible story once; about a woman who was a stay at home mum with 5 children when her husband died. She managed to pull herself by the bootstraps and take over the running of her husband’s distribution company. I often wondered if she was successful because she was exceptionally smart or because he discussed all his transactions with her while he was alive. Perhaps it was a combination of both.

Unfortunately, ‘Oh I don’t need to know about our money matters because my husband takes care of everything’ is a sentiment often expressed by many stay at home mums. While its great that your husband supports you financially, you should ponder on the following. Will our family be able to maintain this lifestyle if anything happens to my spouse? Will my children be able to go to the same schools they attend now? Will I have the means to pay rent every year?

Coupled with the fact that our society can be very susperstious when it comes to talking about wills and what will happen if? Men often don’t talk about work because they are afraid they will bore their wives with the details.

Take an interest in his business. Your husband is more likely to share the details of the ins and outs of his money with you, if you can hold an intelligent conversation about it, give some insight or add value. Educate yourself about his industry, watch the news, and know what is going on in the world. Not everyday ‘Fashion police’ or ‘African magic’, sometimes CNN and Channels news.

Folake is a wife and a mother of 3 beautiful children. She gave up her lucrative banking career a year after she got married to focus on raising her kids because the stress of both parents working rigorous hours was starting to take its toll on her family.

She was fortunate because her husband’s income was sufficient to maintain their lifestyle and he provided her with N200k to run the household and N100k to look after herself every month. So she was ‘chillin’.

Unfortunately, four years later, her husband lost his job and he was adamant that she not, go out to look for work. Even though she fought him on this for a while, it was a frightful prospect. She had been out of the game for so long that it would be difficult to rejoin the workforce with outdated skills, especially in such a tough job market. She thought about starting a small business but they did not have enough capital to risk, while their financial future was so uncertain.

It took her husband almost 8 months to find a new job and the last three months were especially difficult as they had to borrow from friends and family just to make ends meet.

Months later, when things were finally back to normal, Folake decided that despite the fact she wasn’t earning her own income, she didn’t want to be financially helpless, if her family was ever in this situation again.

She realized that although her husband is the captain of the ship, she is his lieutenant and she needed to play her position. She respected his wishes, that she remain a housewife but felt she needed to take control of the aspect of her family’s finances, she had some power over.

Tracking Her Spending
Using her bank statements, she began an exercise to track her expenditure. This helped her determine exactly where her money was going and by categorizing her spending, she was able to highlight her problem areas. 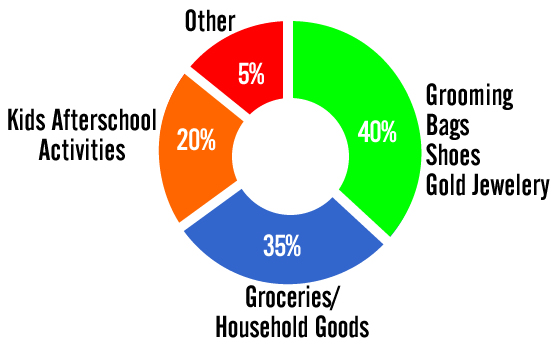 What she discovered surprised her. She was not an extravagant person but according to her statements she spent 40% of the income that came to her on grooming, bags, shoes and gold jewelry. She made a decision to reduce her expenditure on these items because when her family was facing difficulty and she needed to start selling off what she thought were valuable assets, she was disappointed to discover that she could only sell what she had acquired for a fraction of the cost.

She also decided to cut spending on food by limiting the things she bought at supermarkets that could be bought in bulk in the market at a lower cost.

Created A Budget
Folake realized she had never really had a budget. She used to think that as long as her spending did not exceed the 300k her husband gave her she was fine but after their mini crisis she realized it was important to create a budget that cut her spending by 20% so she could put it towards her financial future.

Started an Investment Portfolio
After 6 months of saving, she went to speak to an investment adviser to see how she could get a better return on the money she was saving. Her portfolio was structured as follows. 30% in fixed deposits, 20% in Treasury bills, 30% in Mutual funds and 20% blue chip stock and earned an average annual return of 9%.

Even though she didn’t earn her own income, by taking these steps she had created Plan B for her family and that helped to relieve some of her financial anxiety.

Looking after our kids is the most important role a woman will ever have. So, if you’ve made the decision to give up working to stay home and give them your full attention. It is a lifestyle choice and I applaud you for it. However, it’s important to have hands on approach to your family’s money matters in whatever capacity. Either by being fully aware of the financial decisions being made on your behalf or by taking control of the aspect of your finances you have jurisdiction over.

Move Back To Nigeria: Read Dele Ijaiya-Oladipo’s Story To Find Out the Three Things He Recommends Before You Make the Move