"God mandated me to be governor of Delta State in 2015" - Only Female Aspirant, Ngozi Olejeme 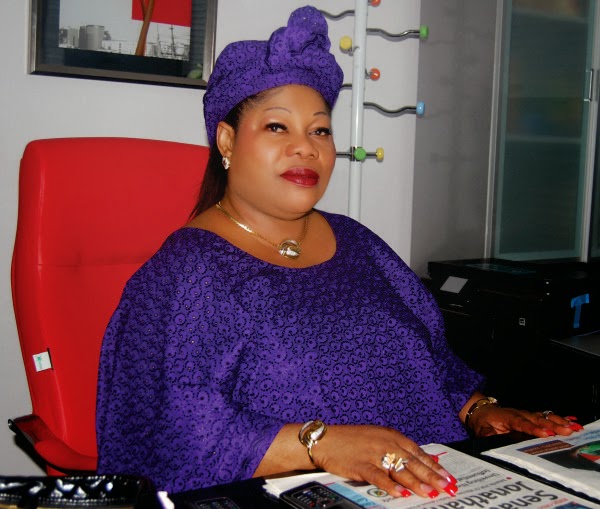 A People’s Democratic Party (PDP) governorship aspirant for Delta State, Ngozi Olejeme, has said that her interest in running for the state’s 2015 governorship race is “backed by God’’.

Olejeme, who said this while speaking with newsmen on Saturday in Abuja, said her mandate was to ensure better living standards for the people of the state.

She spoke after submitting her nomination and expression of interest forms to contest the Delta governorship election in 2015.

Olejeme, who is the immediate past Director-General of the Nigeria Social Insurance Trust Fund (NSITF), resigned her position recently to contest the election.

“This mission is God’s mission; I didn’t opt to become governor; God mandated me that He wants me to go and do that great job He used me to do in NSITF.

“If God gave me a moribund organisation (NSITF) and within a space of two years, God turned around the organisation to the envy of all, then God will do wonders in Delta through me,’’ she said.

She said that her strength had always been God and would enable her to positively transform the state.

Olejeme, the only female among the 20 aspirants in the governorship race, stressed that she did not join the race for material gains, but: ” to do the will of God’’.

“I would, however, agree that the governorship position had been zoned to Delta North and in that zone, I am the aspirant to beat,’’ she said.

She stated that she was not intimidated by the array of male aspirants in the race, adding that she had what it would take to emerge as Delta’s next governor in 2015

“The men are intimidated by me; in fact they are so jittery and afraid, but I always tell them that they are my brothers and at the end of the day, they will support me.

“But as it stands today in Delta, I am the number one aspirant; the one people will compete to beat.”

Another PDP Delta governorship aspirant, Chukuwma Oyibode, who also claimed to have been inspired by divine intervention, promised to renew the state’s infrastructure if elected.

“I did not come into the race because somebody called me or because I want to be popular. I came under the ordinaries of heaven; I believe that I have enough inside me to give to Delta,’’ he said.

He promised to address the issue of bureaucratic bottle necks in the state’s civil service.

Oyibode promised to renew the state’s infrastructure and create an environment conducive for foreign investors to thrive.

The aspirant added that if elected, his administration would also create cottage industries across the 25 local government areas in the state.

This, he said, was to create income for rural settlers and reduce congestion in the urban centres.

Oyibode also promised to provide free technical education for the people, adding that when the people were  technically equipped, industrialisation would be encouraged.

“From the technical knowledge they acquire, we will encourage them my giving them loans to establish small and medium scale industries,’’ he said.

According to him, this will reduce poverty and unemployment in the state.

Why Does Facebook’s Mark Zuckerberg Wear the Same T-Shirt Every day?