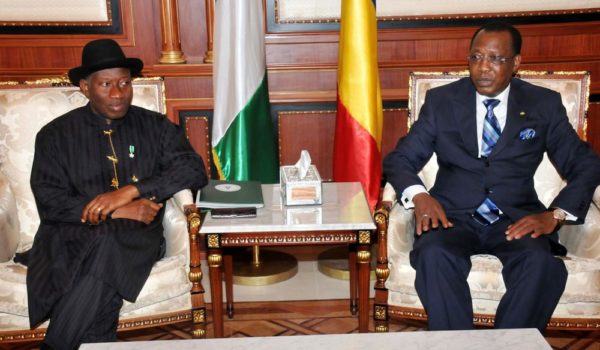 President Goodluck Jonathan (l), with President Idris Deby of Chad, at a bilateral meeting in N’djamena, Chad on Monday (24/11/14).

President Goodluck Jonathan on Monday in N’Djamena, the Chadian Capital, reiterated the need for Nigeria and its neighbours to intensify joint actions and cooperation to defeat terrorism and insurgency.

This is contained in a statement issued by the Special Adviser to the President on Media and Publicity, Reuben Abati from N’Djamena.

The statement said that Jonathan made the call while speaking  to reporters at the Presidential Palace in N’Djamena after a closed-door meeting with his Chadian counterpart, President Idris Deby.

Jonathan was quoted as saying that their talks focused mainly on security and economic cooperation.

According to the statement, the president told reporters that Boko Haram had a lot of external influence from outside Africa.

He said that this had made it even more imperative for all countries in the region to work together to overcome terrorism and other criminal activities across their borders.

“If you look at the economies of Nigeria and Chad, both are linked. The Boko Haram people don’t take permission to move from Chad, Niger, Cameroon and Nigeria.

“If the countries do not cooperate, we will not find it easy to win the war, because when the heat is strong in one country, the criminals and terrorists will go to another one and hide.

“So, we must work together and we are discussing along that line,” the statement quoted him as telling reporters.

The News Agency of Nigeria (NAN) recalls that Monday’s visit by Jonathan to Chad was his second in the last two months, the first being on Sept 8.

According to the president, this underscored the importance of building a “robust relationship” between both countries to improve trade, economic and security ties.

He said that discussions between both countries on cooperation in the ICT sector were ongoing.

He expressed optimism that more proficient use of modern technology would greatly help to address economic and security challenges in the region.

Accompanied by the Minister of Foreign Affairs, Aminu Wali, and the Director-General the National Intelligence Agency, Ayodele Oke, Jonathan has returned to Abuja, the statement added.