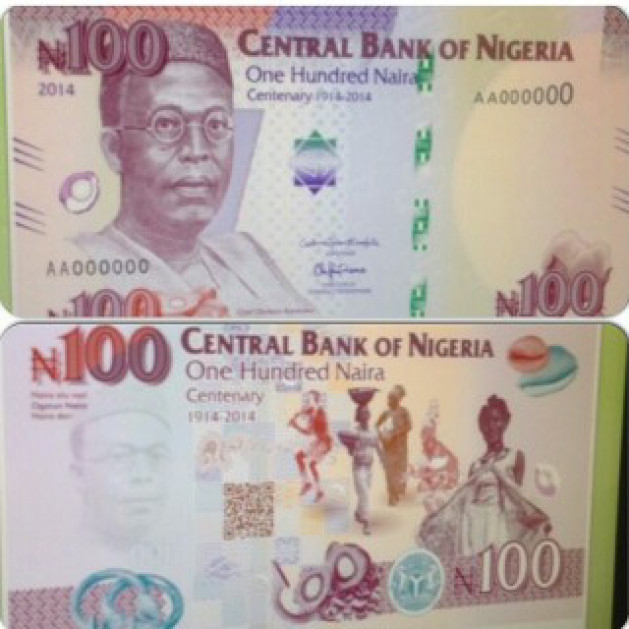 The Central Bank of Nigeria said that the commemorative N100 banknote unveiled recently by the President, Dr. Goodluck Jonathan, is going into circulation from Friday.

This is contained in a statement signed by Ibrahim Mu’azu, Head, Corporate Communications, on Friday in Abuja.

It directed all branches of the bank to commence issuance of the currency in their respective locations.

“The commemorative note will circulate alongside the existing N100 note.

The note, which is embedded with features to assist the visually impaired recognise genuine notes, also has other security features easily identifiable through look, feel and tilt of the currency note,,” it said.

It recalled that the CBN Governor, Godwin Emefiele, at the unveiling of the new banknote, explained that it was designed with enhanced security to offer robust resistance against counterfeiting.

It added that the authentication features of the note included window micro-optics, showing the national flag and numeral 100 indicating the value of the denomination and the attainment of the centenary period.

“The new design retains the portrait of Chief Obafemi Awolowo both in the ink, that is the inter-glow level, as a portrait and also in a paper as a shadow image.

“In addition, there is a spark feature of a rolling manila bar, which was the instrument of transaction during the slave trade era.

At the back side of the currency is the introduced Quick Response Code, (QRC), a digital communication feature that highlighted and sourced all the information about the centenary,” it said .

According to the statement, the QRC application, the bar code on the banknote, can be scanned by users to read a brief history of Nigeria.