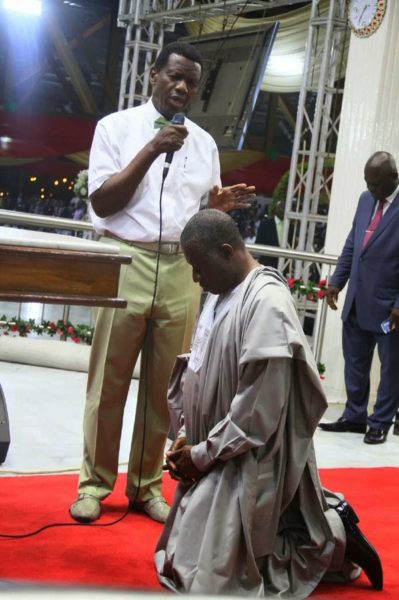 President Goodluck Jonathan had quite a busy weekend. He visited two churches over the weekend: The Redeemed Christian Church of God (RCCG) on its Lagos-Ibadan expressway site, and the Lord’s Chosen Charismatic Revival Movement in Ijesha, Lagos.

During his visit to the latter church on Saturday, Jonathan addressed the congregation. During his speech, he warned that people contesting for political office should not use churches as a political campaign, as doing so would be inappropriate, Daily Post reports.

“I would not say much because this is not a good period for those of us who are contesting for election to talk so much in church. I do not want to be accused of coming to campaign in churches because I believe that we should not campaign in churches. We may discuss with people but not to use the platform of the church to campaign,” he reportedly said.

The president also spoke words of encouragement, promising that he would continue to work harder to ensure adequate protection and provisions for the people of Nigeria.

During Jonathan’s visit to RCCG on Friday, he similarly pointed out that his presence was not for campaign purposes.

“I am not going to campaign even though the election is near because the General Overseer will not allow his altar to be used for political campaign but I want to tell you to shun violence and pray for peace in all the elections,” he said. I am here to join you in prayers for our nation tonight. The whole world is passing through a challenge of religious extremism. Our country is facing a difficult moment but very soon, it will be over with the collaboration of our neighbours.”

During both visits, the head pastors of the respective churches prayed for the president and the nation.

Photos from the RCCG Visit:

Love Just Got Even Better as You Ignite Your Love | PowerOil Promises an Unforgettable Valentine’s Season!