Ali Baba: If You Still Think It's a Man's World You Are a 'Lafu'! 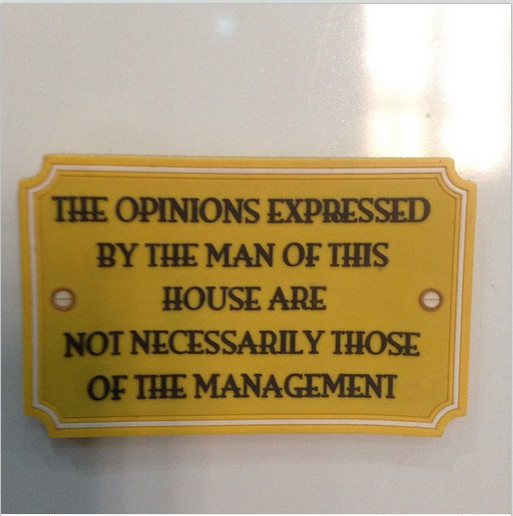 Comedian Ali Baba has got a few tips to share with newly married men.

According to him women are really the ones who rule the house (and the world) and any man who thinks otherwise is a ‘Lafu’.

He posted the picture of a fridge magnet (above) on his Instagram page with a long caption:

This is on the door of my fridge, in my bathroom. In a house where I am the man. By the way, a wise man once said, whenever you meet a man that always shouts, I AM THE MAN OF THE HOUSE! Chances are, he is not. They often start with “OLOWO Ori mi”… Story for the gods! Because when you hear that you are about to be scammed into thinking, you’re the man and you rule! Eti re melo?????? Anyway, There is a lesson in this for all young men who are about to get married, just got married or married but still think they are the man! If you still think it’s a man’s world, you are a lafu! And if you think you are the one that have it all locked down, think again! You are on a looooooooong thing. Many of us may not know and will never know, how much of the toasting we actually did. Because, some ladies had already set all kinds of trap for us and just patiently waited for the traps to catch us. But the trap is set in a way that it now seems that we were the ones who set the whole thing up in the first place! AKAMU like us! That’s how we will be bragging to people how we scattered the babe’s head and made her fall yakata for us. When in actual sense, she had fallen yakata for us long ago and was just waiting for you to catch up. Now, you this Lastma will not let us rest with how you made her say yes. It’s a Man’s world my foot! These women have us so locked down like Alcatraz. They rule the world. Men who are in denial only end up getting more locked down than those of us who have “Kuku GBA fun OLORUN” and are under management. On behalf of men who agree with me, I give double twaaale to the women who have our MUMU BOTTON on speed dial with full functional MAGA remote controls. To all the men I say, you are not alone! We are all in this together! WHO RUN(S) THE WORLD? 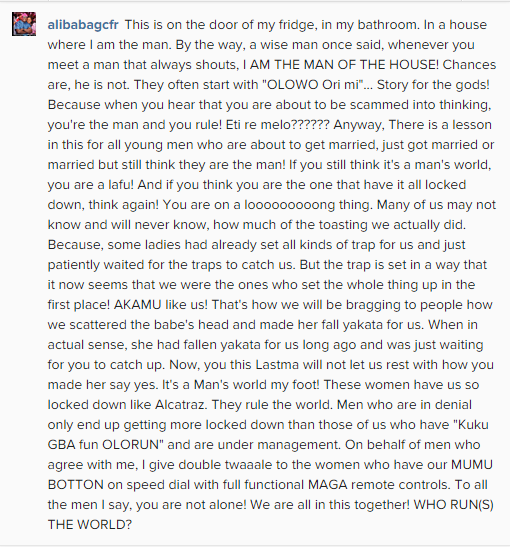 Earlier in the day he posted a cute photo of himself and his wife.