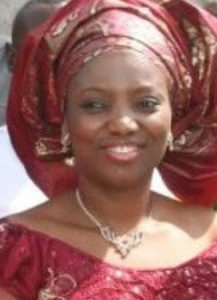 Judith Amaechi, wife of Governor Rotimi Amaechi of Rivers, has advised Nigerian women to protect their children from being initiated into secret cults to cause violence.

She gave the advice on Tuesday at a sensitization rally for women in Abonnema, headquarters of Akuku-Toru local government area.

She said that women should rise up to the challenge of redirecting their children and wards from indulging in negative practices that could jeopardize their future.

“Beyond political power, let us allow the power of God to reign supreme in our lives for our children to have the right direction,” she said.

Amaechi also urged the women not to betray their conscience by collecting money to vote against their will.

In her remarks, Elima Peterside, wife of the APC governorship candidate in Rivers, urged the women to vote for her husband and other candidates of the party.

She said that if her husband wins the election, the women would be given soft loans grow their businesses.

She assured them that her husband would continue with all the on-going projects initiated by Amaechi if he wins the elections.

She described Amaechi as “a talk and do servant leader” who believed in working for the good of the people.