A state of emergency has been declared in Baltimore, Maryland after protests regarding the death of a 25-year-old African-American man, Freddie Gray who died in police custody, turned violent. CNN reports that Baltimore police arrested Gray on Sunday, April 12th, and during the course of the arrest and being transported to the police station, he suffered a severe spinal cord injury, his voice box was crushed, and his neck snapped. He eventually went into a coma, and died days later.

New reports recently emerged, revealing that he didn’t get timely medical attention after he was arrested, even after he complained that he couldn’t breath. Also, he was not buckled into a seat belt while being transported in a police van.

Gray’s funeral was held on Monday, April 27th, and on that same day, angry residents stormed the streets to protest but unfortunately, the protests became violent leading to attacks on police officers. Police cars and several buildings and businesses were also set ablaze. 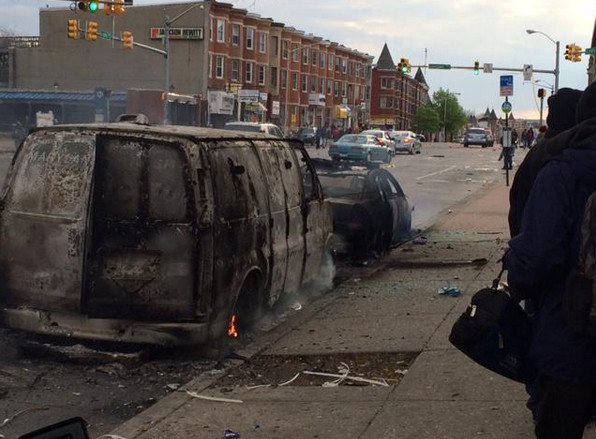 Police fear that the violence may escalate. Authorities state that “The Baltimore Police Department/Criminal Intelligence Unit has received credible information that members of various gangs including the Black Guerilla Family, Bloods, and Crips have entered into a partnership to ‘take out’ law enforcement officers,” police said. “This is a credible threat.”

As a result of the situation, the city has imposed a mandatory curfew from 10 p.m. to 5 a.m. daily, effective for one week starting Tuesday night. Also, 1,500 members of the National Guard have been deployed to Baltimore.