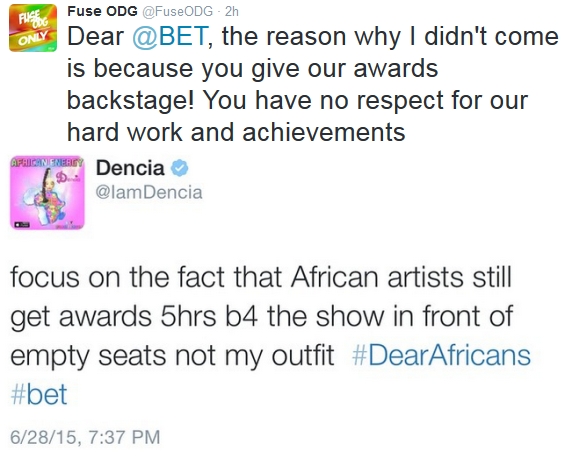 For the past few years BET Awards has given out awards to African artists either backstage or a few hours before the show.

This year, Ghanaian dancehall artist Stonebwoy won the ‘Best International Act Africa’ award and a few people have spoken up about the fact that he received his award hours before the actual event started.

Dencia and Fuse ODG expressed their distaste for BET’s way of doing things on social media.

Dencia shared her thoughts on Instagram and stated that instead of people focusing on her outfit (click here if you missed it) they should focus on this.

While u were worried about my outfit?your faves were waiting to give a speech in front of empty chairs with pictures at an award show made for black people.I wish y’all will be telling BET to fix that.Two years ago i spoke about that I was called a hater..FYI awards don’t come with money & awards don’t mean anyone is better than anyone (After all I have seen amazing artists get beat by not so good artists) so while u worried about me getting an award I am worried about where I’m gonna drive my Rolls Royce wraith to but for those of you who care I think African artists should be treated equally (like the American artists) how are you bringing cultures together if u aren’t putting them together officially? If the Oscars did the same thing all I’ll hear is racism..now take ur remaining data and help ur brethren (when they show u the awards in Africa it is edited to look like it was given in front of everyone)