Nicki Minaj Responds to her Ex Safaree Samuels’ Diss Song in the Most Positive Way!

Ese Atakpu: Did You Choose Your Partner for Passion or For Security?

Celebrating Father's Day 2020! These Dads Share Their Inspiring Reflections on Fatherhood During a Pandemic

Biodun Da Silva: If it Looks Toxic & Feels Toxic Then It Is Toxic... Get Out of That Relationship NOW!

Vandora has a Question for You: Are You Honest With Your Partner?

It’s admirable when people keep things civil even after they break up – and sometimes it’s the hardest thing to do but Nicki Minaj is giving it her best shot.

After revealing quite a lot about her 12-year relationship with Safaree Samuels on her album ‘The Pinkprint’, the rapper moved on to a relationship with Meek Mill (filled with PDA moments) and has been quiet about Samuels ever since.

It however looks like Samuels still has a lot to say as was revealed in his latest single ‘Love the Most’ which was essentially about his relationship with Nicki Minaj.

“Yea I was mad/
In our pictures you’d be smiling but inside I was feeling sad/
Did the good outweigh the bad or did the bad outweigh the good?
You ain’t do it all alone, we took ourselves up out the hood.”

…and even more lines

Yeah I know I’m not perfect you was paying all the bills.
You remember what you told me when you wasn’t on them pills?”

He also hinted that her relationship with Meek started when they were still together, clearly he is still hurt. 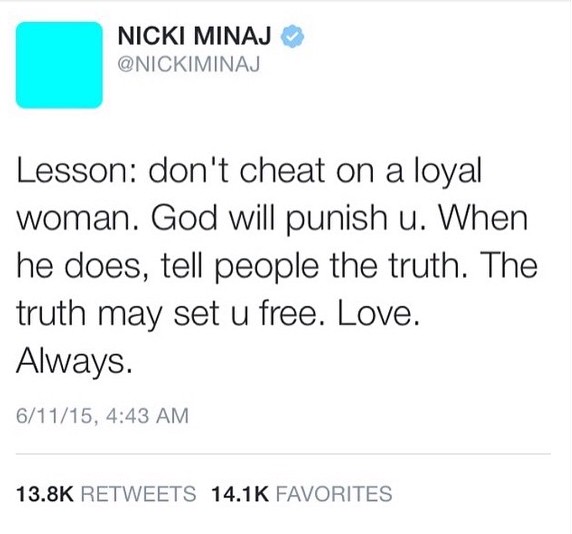 Frances Okoro: Save Us From the ‘Come To My House’ Syndrome