The Rock is Dead…It’s Dwayne Johnson’s Time! Talks Transitioning from Wrestling to Acting in Esquire Magazine 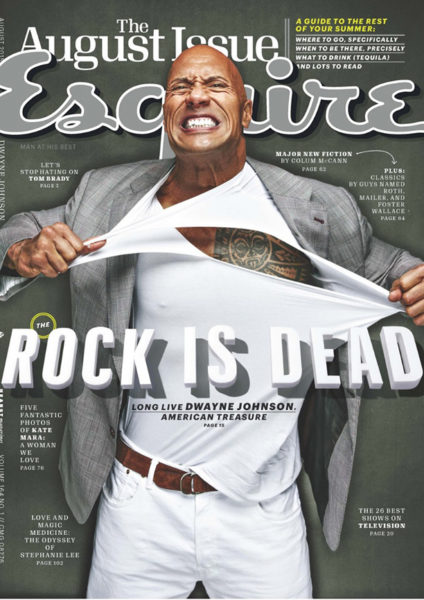 Dwayne “The Rock” Johnson rips his shirt off while posing for the cover of Esquire‘s August 2015 issue and the 43-year-old actor had quite a lot to talk about. 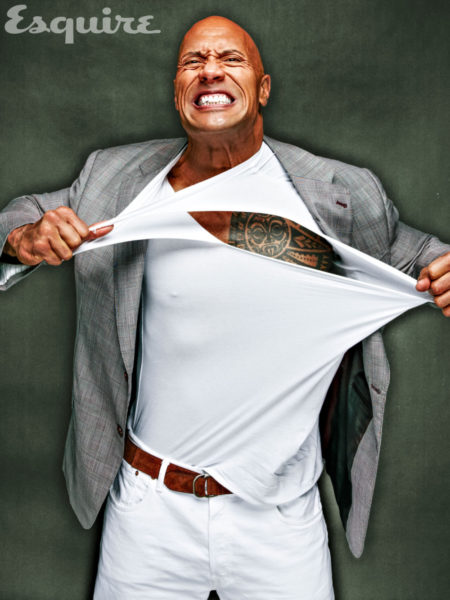 On transitioning from wrestling to acting: “I’ve been through all this other sh-t before. I never quite understood why if you’re successful in something, and then you want to make the transition to Hollywood, why wouldn’t you apply the same discipline and processes that you did with wrestling and football? Which meant: surround myself with great acting coaches; definitely get a good director; I need great actors around me to help me raise my game; I don’t know what the f–k I’m doing… I have been told I have potential. I think I do. Let’s give it a go. And that allows more people to say, ‘Okay, let’s give it a shot.’ Compared to: I think I’m gonna be great. I’m gonna make 30, 40 movies.”

On his high pitch singing voice: “In Polynesian culture, the men run 300, 350 pounds and the women are even bigger. But Polynesian men are known for singing in a pitch that is soft falsetto singing. It sounds amazing. That’s just how they sing, at a very high pitch in an octave that’s very falsetto and soft. I fool them with my voice. I’m singing in Disney’s next animated musical, called Moana.”

On a special letter he received: “About three weeks ago, I’m here at the house and I get a letter—’Been enjoying your movies over the years. Very entertaining. I feel like I’ve really gotten to know you over the years, most recently after watching you host Saturday Night Live. Great job. You continue to go for it. Proud of your work and look forward to meeting you. Steven Spielberg.’”

Related Topics:Esquire MagazineThe Rock
Up Next