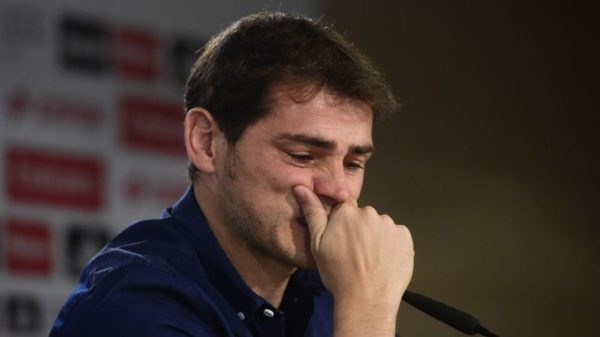 After months of speculation, the 34-year-old footballer and captain of the team, broke the news in an emotionally charged news conference on Sunday, ESPN FC reports.

Casillas has spent 25 years at the club, and has made 725 official appearances. Although he has two years left on his contract with Real Madrid, he has had three difficult seasons. As a result, he has decided to get a fresh start by moving to Porto, which is widely regarded as the second most successful Portuguese football club.

Here is an excerpt from Casillas’ farewell speech:

“First of all, thanks to everyone for coming here and for supporting me at this special time. I have come to this great stadium to say goodbye to everyone, and especially to all the Madridistas.

Since yesterday I am no longer a Real Madrid player and I will now go to FC Porto. My decision to go to FC Porto was based on two factors — the enthusiasm that their club president, coach — who I know well — and the staff have transmitted to me.

Secondly, the affection that I have received when people found out that my destination would be Portugal.

I will do all I can not to let them down and I will try to win as many titles as possible with them. Thank you, FC Porto, for trusting me.”

Win Fabulous Prizes in ‘The Repost JawDropping Contest’ on Instagram

Moremi Elekwachi is a Media and Communications expert. She holds a Bachelor’s Degree in Journalism from the University of Georgia, and a Master’s Degree in Communication Management (with a concentration in Marketing communication) from the University of Southern California.She is Founder and Lead Publicist at Euphorique PR, a leading full-service Public Relations & Marketing Communications company that helps individuals, companies and public figures effectively communicate, engage, and build relationships with their target audiences & stakeholders via digital media and traditional media platforms.Prior to establishing Euphorique PR, Moremi gathered a wealth of experience, working at prestigious media companies both at home and abroad including Wondros (Los Angeles, CA), Wildflower PR, and also BellaNaija, where she served as News Editor & Head of Business Development.Moremi is also the founder of www.queenmoremi.com, a fresh platform dedicated to empowering and celebrating the modern African millennial woman, as she strives to live her best life.In her spare time, she loves to write, gossip about popular culture, and sing her heart out.@queenmoremi: Twitter@queenmoremi: Facebook @queenmoremi: Instagram