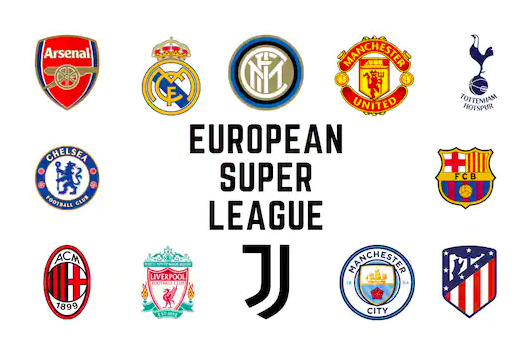 Early this week, 12 of the world’s most popular football clubs announced plans to start the Super League, a closed competition in which they will compete against one another for a share of football’s billions of dollars in income. 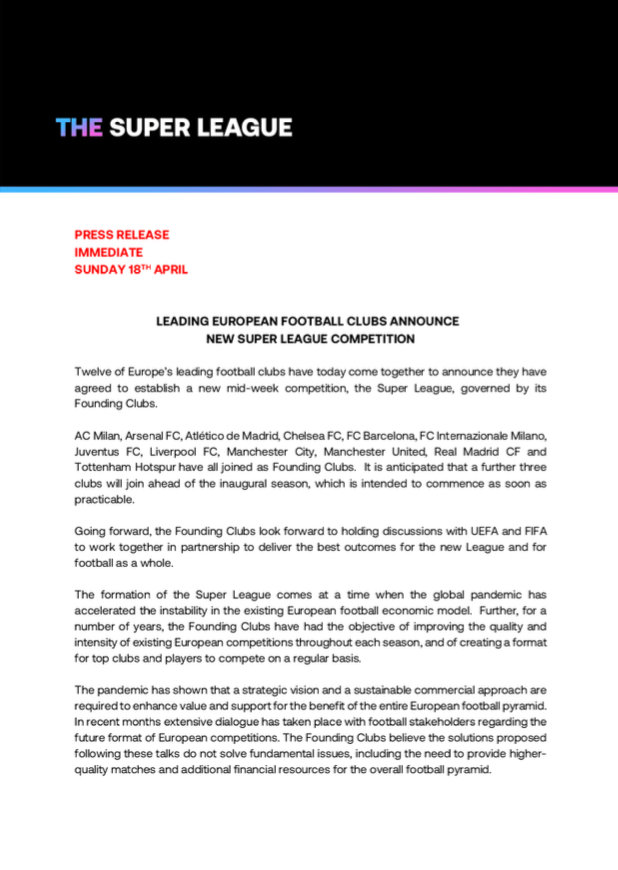 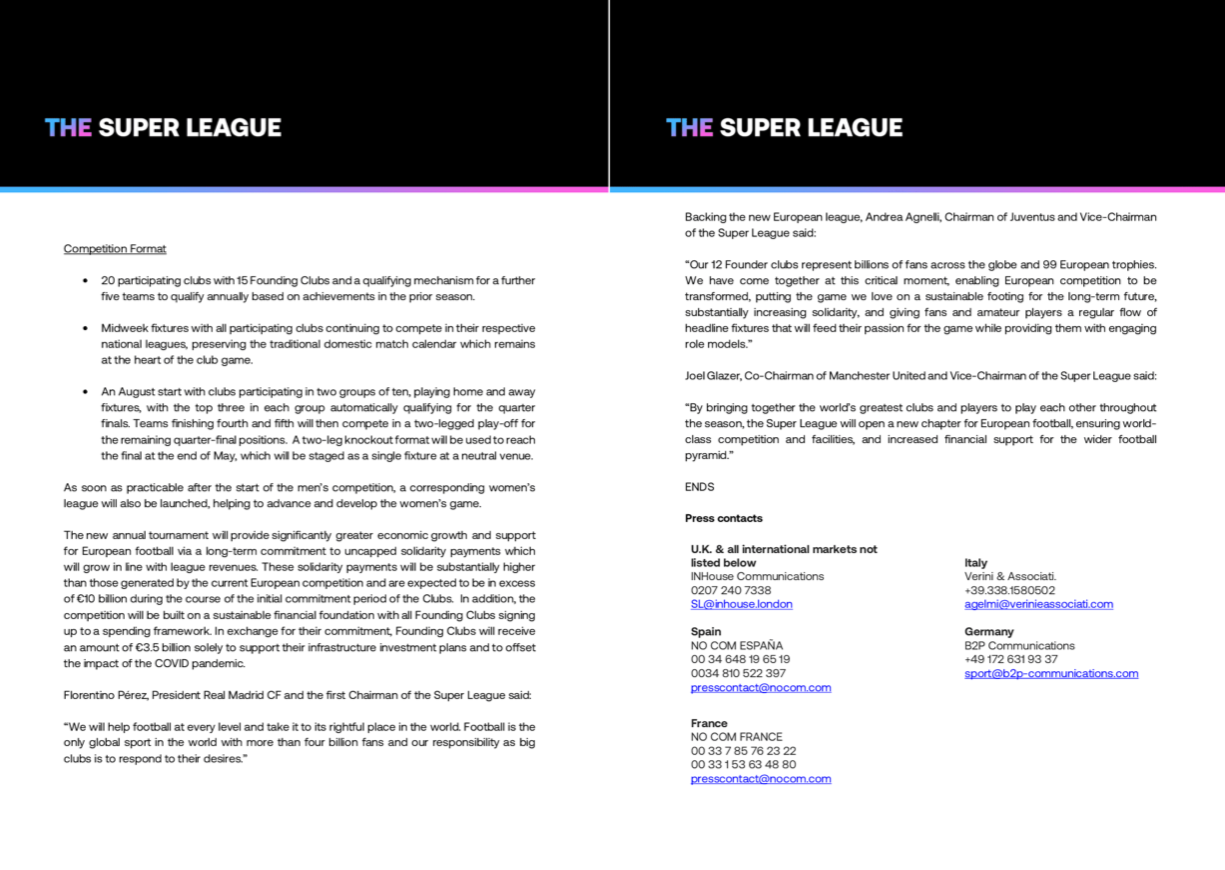 However, this incited outrage among fans, football pundits, and domestic leagues.

First things first, what is the Super League?

It is a global competition that brings together all of Europe’s most well-known names in a unique event. It’s been in the works for a long time now, but it wasn’t until Sunday night that it took shape.

What clubs get to play in the Super League?

Here’s how it works:

The 20 teams will be divided into two groups, each of ten teams, and will play home-and-away matches. The top four clubs in each group will advance to a playoff round, which will be common to Champions League fans, after the regular season. The only distinction is that the playoffs will last four weeks until the conclusion of the season.

According to the statement, the first edition was meant to take place “as soon as possible.” It was scheduled to take place in August, with two groups of ten playing home and away, with the top three qualifying for the quarter-finals.

The fourth and fifth-placed teams will compete for the next two quarter-final slots. The quarter-finals and semi-finals will be contested over two legs, while the final will be played in a single game at a neutral venue.

Well, every founding member stands to benefit about $400 million, according to their own figures, only for establishing “a secure financial foundation.”

The clubs projected that selling the Super League’s broadcast rights, as well as advertising revenue, would be worth billions of dollars. And instead of being redistributed to smaller teams and leagues by UEFA, it will all go to them. Domestic leagues and their teams, on the other hand, would lose a lot of value when they are essentially made every year.

These clubs have released statements announcing their withdrawal from the planned European Super League:

It was never our intention to cause such distress, however when the invitation to join the Super League came, while knowing there were no guarantees, we did not want to be left behind to ensure we protected Arsenal and its future.

As a result of listening to you and the wider football community over recent days we are withdrawing from the proposed Super League. We made a mistake, and we apologise for it.

Having joined the group late last week, we have now had time to consider the matter fully and have decided that our continued participation in these plans would not be in the best interests of the club, our supporters or the wider football community.

In recent days, the club has received representations from various key stakeholders, both internally and externally, and we would like to thank them for their valuable contributions.

Manchester City Football Club can confirm that it has formally enacted the procedures to withdraw from the group developing plans for a European Super League.

We have listened carefully to the reaction from our fans, the UK government and other key stakeholders.

We regret the anxiety and upset caused by the ESL proposal. We felt it was important that our club participated in the development of a possible new structure that sought to better ensure financial fair play and financial sustainability whilst delivering significantly increased support for the wider football pyramid.

Atlético de Madrid’s Board of Directors, which met on Wednesday morning, has decided to formally communicate to the Super League and the rest of the founding clubs its decision not to finally formalise its adhesion to the project.

Atlético de Madrid took the decision on Monday to join the project due to circumstances that no longer exist today.

For the club, harmony between all the groups that make up the Red & White family, especially our fans, is essential.

The first team squad and the coach have expressed their satisfaction with the club’s decision, as they understand that sporting merits must prevail over any other criteria.

We accepted the invitation to participate in the Super League project with the genuine intention to deliver the best possible European competition for football fans around the world and in the best interest of the club and our own fans. Change is not always easy, but evolution is necessary for progress, and the structures of European football have evolved and changed over the decades.

However, the voices and the concerns of fans around the world have clearly been expressed about the Super League, and AC Milan must be sensitive to the voice of those who love this wonderful sport.

We will continue to work hard to deliver a sustainable model for football.

FC Internazionale Milano confirm that the Club is no longer part of the Super League project.

We are always committed to giving fans the best football experience; innovation and inclusion are part of our DNA since our foundation. Our engagement with all stakeholders to improve the football industry will never change.

Inter believes that football, like every sector of activity, must have an interest in constantly improving its competitions, to keep on exciting fans of all ages around the world, within a framework of financial sustainability.

With this vision we look forward to carry on working together with institutions and all stakeholders for the future of the sport we all love.

With reference to the press release published by Juventus Football Club S.p.A. on 19 April 2021, relating to the proposed creation of the Super League, and the ensuing public debate, the issuer clarifies to be aware of the request and intentions otherwise expressed by certain clubs to withdraw from this project, although the necessary procedures envisaged by the agreement among the clubs have not been completed.

In this context, while Juventus remains convinced of the soundness of the project’s sport, commercial and legal premises, it believes that at present there are limited chances that the project be completed in the form originally conceived.

Juventus remains committed to pursuing the creation of long-term value for the Company and the entire football industry.