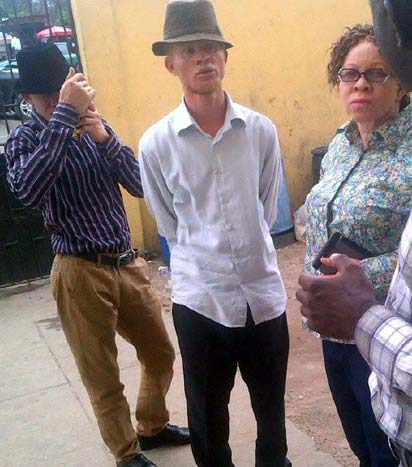 Some member’s of the Albino Foundation at Ugo’s residence

A few days ago, BN brought you the news about Ugo, a 23-year-old Lagos-based Albino man who committed suicide.

Following his death, members of the Albino Foundation in Nigeria are demanding an explanation about his death, Vanguard reports.

Some of the foundation’s members on Wednesday visited the deceased’s Festac residence and met with his family. Afterwards, they proceeded to the police to inquire about investigations into the matter.

“We are here on behalf of the national headquarters of Albino Foundation in Abuja to find out what exactly led to the death of our colleague.

Though he was not a registered member of the Foundation, he was an albino like us, therefore, we have a duty to pay a condolence visit to the family, counsel them and orientate them.

Things like this cannot just happen. We need to know the exact cause so as to help re-orientate others.”

Meanwhile, Ugo’s family has denied reports that he committed suicide due to discrimination about his complexion. They also refuted reports that he took his own life because he was forced to convert to Jehova’s Witness faith.

A member of his family named Oluchi said:

“We have read a lot of reports on my brother’s death. I want to categorically state that he did not kill himself because he was forced to become a Jehovah’s Witnesses member.

It was not also because he was stigmatised as an albino. The truth is that what led him into the act were powers beyond him and he never left any note for us concerning his death.”

UN Says There are Over 1.5 Million Internally Displaced Persons in Nigeria