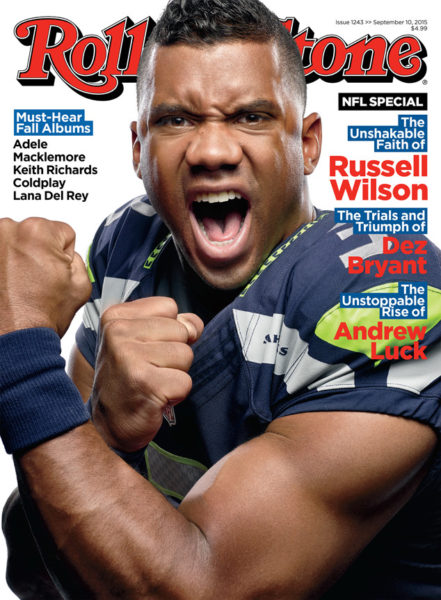 Russell Wilson is an American football quarterback for the Seattle Seahawks of the National Football League. The 26-year-old athlete was married to Ashton Meem from 2012 to 2014 and is currently the man in Ciara’s life.

As much as they have tried to keep things out of the media (at the beginning), it has been near impossible to do so and so far we’ve heard about their abstinence, issues with Ciara’s ex and more.

Russell has not been one to shy away from his stance as a devout Christian and several times he has mentioned that his relationship with Ciara is an ordained one.

In a chat with RollingStone he explains further on why God brought him into her life.

On growing up: I was a bully. I used to beat up people, throw people against the wall and knock their teeth out. My family didn’t have much, you know? I went to a high-end school where kids would make fun of you. Or not make fun of you — more so ‘My family has this, my family has that,’ and they just had it. I had to realize I had to earn my keep where a lot of guys I knew inherited money.

On dating Ciara: I knew God had brought me into her life to bless her and for her to bless me and to bless so many people with the impact that she has and I have. He has anointed both of us — he’s calling for us to do something miraculous and special. For to be carnally minded is death; but to be spiritually minded is life and peace. We connect so well, and we have the same vision. It’s a perfect fit, you know? Is it weird? No. It feels right.

On people saying he is not ‘black enough’: What does that even mean? How are you defining ‘black’ or ‘black enough’? I’m an African-American male with Native American blood. I didn’t grow up with much. I’ve overcome a lot. I’m very, very proud of that history, but I’m also not going to just be defined by the history. I want to be defined by my present — and what’s coming next.

Related Topics:CiaraRussell Wilson
Up Next