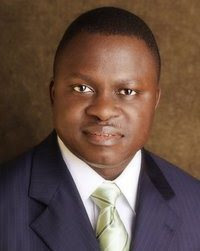 According to Vanguard, Alaibe announced his withdrawal via a statement:

It is with all nostalgia that I recall the zeal, enthusiasm and hope with which thousands of Bayelsans made a statement in the direction of change in August, 2015. I can also vividly recall a mental replay of the occasion wherein a qualitative representation of the leadership of our great party, the All Progressives Congress (APC) ushered in respected leaders and members from their then party, Peoples Democratic Party ( PDP) .

That singular event has been phenomenal just as its true meaning and direction have all exuded confidence, unity of purpose, cohesion, collectivism and courage. That day undoubtedly marked the beginning of a people’s journey from hopelessness and squandry as enunciated by the accidental PDP-led ‎government in Bayelsa state to that of quality leadership that an APC government will represent.

As one of such leaders who took that historic decision, I thought of giving a further bite to my burning desire to extricate the state from‎ abysmal leadership failure. Therefore, my aspiration to be governor after series of consultations was to rekindle our collective hope and lift the state beyond its current state of decay under the PDP.

Regardless, I am not oblivious of the fundamental fact that we all need a virile, united, cohesive and collaborative APC to bring about our desires to fruition. Not only do we need this, APC deserves every sacrifice, including personal interests, to arrive at the envisaged destination come February, 2016.

This is more so that both as individual leaders and as a party, the need to avoid the a situation of crisis that the PDP might inadvertently reap from cannot be over emphasised.

As a result, having carefully examined the circumstances that have trailed the Governorship primaries of our great party in Bayelsa state, I have come to the conclusion that pushing my governorship ambition beyond this point carries alongside it some collateral consequences.

Succinctly, two options are available to me. Whereas I am confident that I have the required support of my admirers and supporters‎ as well as the needed backing of Bayelsans to govern them, the hurdles set on the way of this noble project are seemingly temptous and capable of overheating the APC in Bayelsa.

In another vein, the virtuous path to take is that virtuous one in which personal interest are sacrificed for the common good,whether for the APC or the state in general. This is the path I chose in the light of the prevailing circumstances. I therefore withdraw from the governorship primary contest.

This decision is taken in the interest of our party especially as we face the task of the common challenge‎ of unseating the PDP in the state come December 5.

BN Bargains: Buy 1 Pair of Sunglasses & Get a Second at 50% off from House of Lunettes this Independence