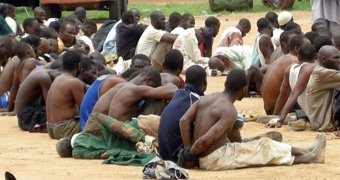 The Nigerian army has revealed that scores of Boko Haram members have surrendered.

According to Vanguard, many of those that surrendered fled their base in Sambisa Forest, Borno State, as a result of a rigorous Air Force mission that exposed the terrorists’ hideouts.

The new strategies being employed by the military have started yielding positive results with scores of terrorists surrendering to troops and many more willing to surrender.

The strategies employed included sustained offensive operations, pre-emptive air strikes by the Nigerian Airforce and routes blocked by ground troops, all geared towards constricting and snuffing out the Boko Haram terrorists.

Many of the terrorists that willingly surrendered, painted images of mass panic and hysteria among their erstwhile colleagues who are feeling the noose tightening on their necks with the relentless efforts of troops and renewed vigour in operations inspired by the personal leadership of the Chief of Army Staff.

Terrorists also seem to have an inkling of what happens to surrendered suspects as regards screening and de-radicalization of innocent ones among them.”

The Nigerian Army in conjunction with the Nigerian Air force and other security agencies will continue to devise and implement effective strategies to bring Boko Haram terrorism to a speedy end.

It will also continue to receive surrendering suspects and assures innocent ones among them that surrender is the only option open to them. The Nigerian Army wishes to also appreciate the great support and information it receives from well-meaning citizens. More of these are required to help towards quicker obliteration of the Boko Haram scourge in our nation.