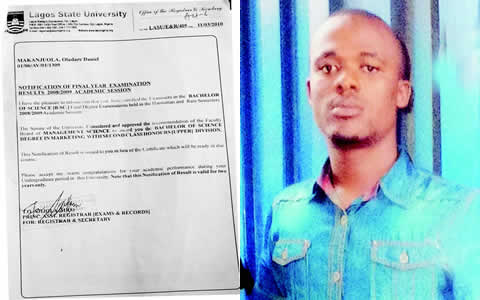 The police said Makanjuola had paraded himself as a degree holder in marketing with Second Class, Upper Division, before his arrest.

He was also said to have tendered a forged National Youth Service Corps discharge certificate and a reference letter to the bank. He claimed to have obtained the letter from United Bank for Africa, his purported former workplace.

PUNCH Metro learnt that the suspect, who hails from Ijero Local Government Area in Ekiti State, had joined the bank in 2013, before he was sacked in July 2015 after the documents were confirmed to be fake.

It was gathered that the fraudulent act was discovered after the management sent a letter to the UBA to verify the genuineness of the reference letter. The UBA was said to have denied knowledge of Makanjuola and the letter.

Our correspondent learnt that the discovery prompted the bank to write West African Examinations Council and LASU, which also disclaimed the results. The suspect was arrested after the case was reported at the Lion Building Police Station.

Makanjuola reportedly confessed stating, “I am actually a National Diploma holder. I secured the fake WASCE and LASU results, using a search engine and CorelDraw application. I scanned an NYSC certificate and used some applications to edit it. I did it in order to put an end to the suffering of my poor family. I am the only son of my father. I want the authority to be compassionate with my case. I was only trying to live a better life.”

Khloe Kardashian says “Thank You for Your Prayers” for Lamar Odom