9 Killed During Pro-Biafra Protests in Anambra 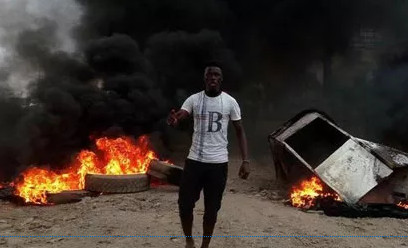 Here are details of the incident as reported by the publication:

Irked by the stubborn disposition of the pro- Biafra agitators, who blocked the Niger Bridge Head and refused to give way to motorists, the JTF comprising Army, Navy, Police and Civil Defence troops, yesterday  afternoon, opened fire at protesting members of Indigenous People of Biafra, IPOB, and  Movement for the Actualisation of the Sovereign State of Biafra, MASSOB.

Five people were killed  at Niger Bridge Head while three were killed at Obodoukwu Road. A suya(barbecue meat) seller said to have been hit by a stray bullet died instantly. The protesters were having a peaceful procession across South East states and had vowed to continue their blockage of the bridge for three days until detained Director of Radio Biafra,  Nnamdi Kanu is released.

Miscreants, on hearing that some people had been shot dead by the JTF, started another protest, marched to the Central mosque near Onitsha Main Market and set it ablaze. A Hilux pick-up van with Federal Government number plate was also burnt when the JTF held motorists and commuters hostage at Upper Iweka.