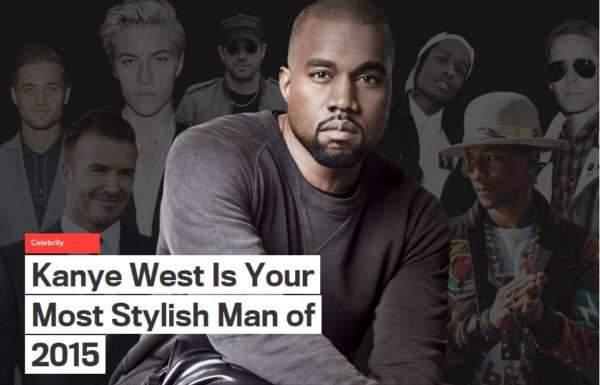 Kanye West has emerged GQ’s Most Stylish Man of 2015 based on fan votes!

The poll was originally a 64 man bracket which was eventually brought down to just two: Kanye and model Lucky Blue Smith. In the end, Kayne beat out Lucky 53.89% to 46.11%.

GQ writes “West has arguably been the most influential fashion figure in hip-hop since his debut album, The College Dropout, dropped in 2004. Over the years, he’s built a fanbase that doesn’t just love his music, but actually aspires to dress exactly the way he does. (Which in 2015 meant a lot of suede Chelsea boots, sweatpants, hoodies, and of course, Yeezy Boost sneakers.) In fact, when it comes to devout followers wearing the outfits of their heroes head to toe, Kanye West’s influence is rivaled probably only by that of James Bond.”

According to GQ, in the final moments of this year’s showdown, tweets from Kim, Kourtney, Khloe, and even Kris Jenner spiked the number of votes cast in West’s direction. And in the end, there were a lot of votes; nearly one million cast in twenty-four hours. The final tally: 520,119 votes for Kanye, 445,073 for Lucky Blue.

Do you think Kanye was the most stylish man of 2015?

Related Topics:GQKanye West
Up Next

Damilola Attoh is the Wana Sambo Woman! Check Out their Chic Holiday 2016 Collection

Get #AsoEbiBella Ready this Holiday! Learn How to Tie Your Own Gele with Molurlah’s Makeover