Nigerian Man in Malaysia Sentenced to Death for Drug Trafficking 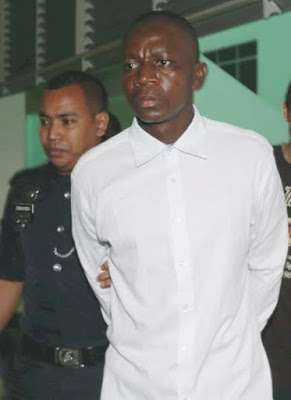 A 37-year-old Nigerian man in Malaysia named Ekene Collins Isaac, was on Monday sentenced to death by hanging after being found guilty of drug trafficking.

The sentence was passed as a result of his trafficking of 915.6 grammes of methamphetamine 3 years ago in Malaysia, Pulse reports.

According to reports, Isaac worked as a cleaner in Nigeria before he relocated to Malaysia.

He allegedly committed the offence at Wad 6C, Serdang Hospital, at Jalan Puchong, Kajang, on March 3rd, 2012. Isaac is said to have ingested the drugs, attempting to smuggler them through that means.