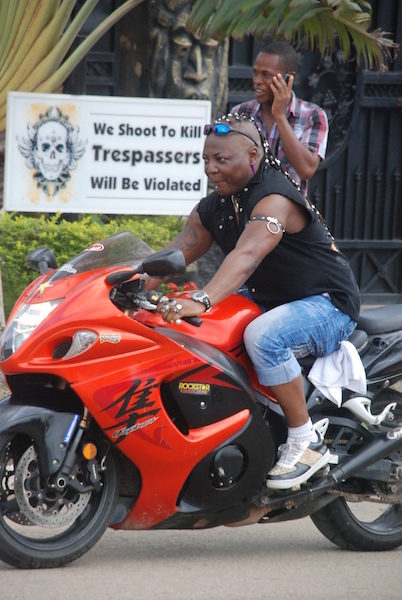 I remember growing up as a teen in Port Harcourt at number 11 Ohafia Street, those were the good old days just before our independence. I was a very playful kid, always rallying around me playmates who were often not in the class of kids that my parents would have loved for me to associate with. My parents I remember always frowned at my choice of friends, they wanted me to keep the company of their friends’ children who also went to very private schools like me but those ones were no fun to be with, I preferred the company and friendship of the drivers and cooks’ children, they were more free and had no airs about them. In those days, I always wondered why they didn’t have as many toys as I had, or why they never had their own rooms to themselves.
Many years down, I no longer wonder why…

After I paid off my parents what I owed them by obtaining a Masters degree in Communication. I set in motion and activated my dream of becoming an outstanding entertainer by building The CharlyBoy brand. Seven years of hardship, self doubt and obnoxious poverty paid off. My tenacity and consistency made me resolute in the pursuit of my dream. I won against all odds. The brand became a force. I mingled with all, gave hope to the less privileged, those who suffered injustice, advocated for the rights and respect of entertainers, jumped around with Nigerian students, okada riders, physically challenged, military pensioners, Nigerian widows, I became the voice of the voiceless. I built a cult followership, that made the powers that be, uncomfortable. Even before my career started, I had always known I would pitch my tent with the masses. The Ajebutter crowd had never been my thing! So I was never afraid of living in their midst. From the CharlyBoy bus stop in Gbagada, to the CharlyBoy boulevard in Abuja, I felt safe living among the people even-though I could afford to live in very exclusive areas. Hummmm I felt untouchable, until…

My Night of Terror!
You never know how safe you are till your space is violated, until you have been terrorized and traumatized. I had my own 9/11 one fateful night in September 2011 about 11.30pm. The peace of the Punk Palace was shattered. My wife and I were rudely awakened by screaming, shouting, general pandemonium at my gate. I quickly zoomed in my CCTV to see what the commotion was about. I saw my two security guards trying to contain an intruder who had invaded my residential home. In the confusion that ensued, I picked up one of my automatic pistols and headed to the gate house to see what was going on. Meanwhile I kept hearing the screaming and breaking of glasses. My wife was visibly shaken, I didn’t really know what to make of it but I felt safer with my gun in my hand. As I came face to face with the intruder I heard him chanting Allah Akbar, it then dawned on me what I was dealing with. One quick look around, I saw the windscreen of all my cars had all been broken by the intruder. There was blood scattered everywhere apparently he had cut the ears of one of my security guards and had stabbed the other in the chest. As I raised my pistol to shoot this motherf**ker, the sound I heard was, CLICK! I forgot to load that particular gun. By the time I ran upstairs to get my Ak47, the man had escaped leaving my security guards seriously injured. Throughout that night all the policemen at the neighborhood police post and I searched all over for the intruder and never found him. Since then I have bought more guns, taught my wife how to shoot and put a disclaimer in front of my house with this signage. WE SHOOT TO KILL. I swear that man would have been my first Kill.

Our Collective Fight Against 9/11
Terrorism is as old as man. Be it car jacking with a weapon, kidnapping, armed robbery, even one chance. To spread terror is terrorism. Goths used it against the Romans, CIA used it on Cuba, Boko Haram is using it on us and ISIS is using it against the world. But despite all the fear they terrorists instill in us, we must overcome this evil. Darkness can never overshadow light.
Remember when the brothers in the Niger delta began their militancy by kidnapping oyibos, now it’s big business for some.
Violence begets Violence but this violence is not what we understand.
My violence will be for self preservation not for self proclamation. I will shoot to kill who ever trespasses me and mine, not who I trespass.

Our leaders need to understand that the war on terror if not handled properly may just be futile. There are terrorists in every country. The task of leadership is to ensure that they don’t become a threat to the lives and property of its citizens. How effective is our fight against terrorism in Nigeria. For how long will we continue to hear of bombings in Nigeria? Terrorism is a mindset and a way of life for certain people who are not just going to “give it up.” And believe it or not, All terrorists believe they’re doing the right thing for their cause.
The worst kind of battle to fight is with an opponent who has nothing to lose. This terrorists have shown you that they’re not afraid to die. But we are, because it is our fundamental human right. When one of them sacrifices their life in a bombing, there will always be someone ready to step up.
You will be surprised how poverty, unemployment and hopelessness can stimulate the youths in becoming creatively evil. Our leaders are failing to see that Terrorism can be eliminated when our youths are literate and skilled, when poverty and hunger are eliminated, when the youths are gainfully employed. When they stop stealing away their future. What do you think?