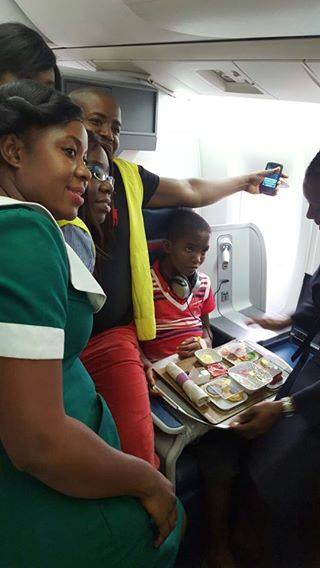 A cancer-stricken boy in Ghana got his dream granted when he got to enter an airplane.

According to several comments and this report below, it seems his parents have given up on treatment options because they cannot afford it, so getting this treat is one of the events to soften the pain of his last days.

Truly heartbreaking, especially as Yen Ghana reports the parents have given up, rebuffing donations from well wishers. According to Yen Ghana,

A cancer-stricken boy, who has been told by doctors that he may die anytime soon after his parents failed to fund his treatment, has made one last wish before his death.

The boy who has been suffering from a protracted cancer and has been told by medical doctors that nothing can be done to save him, asked nurses of an undisclosed major hospital in Accra to drive him to the Kotoka International Airport so he can sit in a plane before his date with death.

The nurses granted his wish and drove him in an ambulance to the Airport where he had the opportunity to sit in a Delta Airlines flight and took photographs with the cabin crew. According to the nurses, parents of the child are fed up and depressed and are only awaiting the young boy’s death.

According to information picked up the boy was kept at home because the parents could not afford the cost of the treatment.

Several advances made by benevolent citizens to help the young boy have been turned down by the parents.

Stay healthy for #RunLagos! Redcare HMO to provide medics and ambulances at the Lagos City Marathon