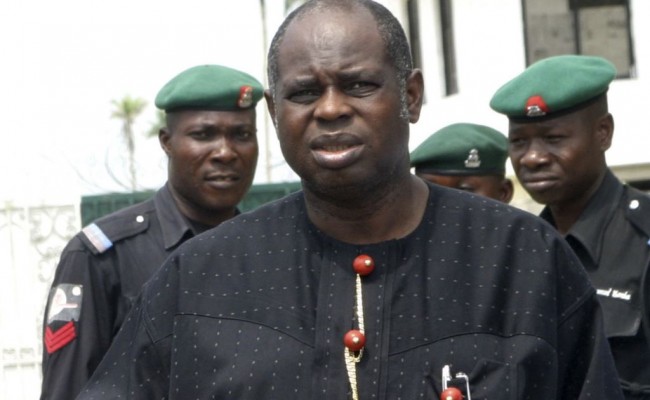 Former President Goodluck Jonathan has said that the demise of the first civilian governor of Bayelsa, Diepreye Alamieyeseigha, was a personal loss to him, as he described him as a social transformer of the state and the society.

Alamieyeseigha was laid to rest on Saturday at his country home in Amassoma, Southern Ijaw Local Government Area of Bayelsa.

Others at the service were Ijaw Youth Council President, Udengs Eradiri, and government officials.

The service was in honour of late Alamieyeseigha, fondly called the Governor-General of Ijaw nation at the Saint Peters Anglican Church in Yenagoa.

Jonathan said Alamieyeseigha would forever be remembered as his political mentor and leader and that his legacy would remain on the sands of time.

The former president added that while some people do not live their name, Alamieyeseigha lived his full names.

He explained that “the name Solomon means peace and wisdom, while Peter means rock or fearless, and Alamieyeseigha was indeed endowed with uncommon wisdom, exhibited peace and stood for justice, fairness and equity.”

He noted that Alamieyeseigha was an astute politician and leader that could never be intimidated when he was convinced about the truth or what was right and just to move society forward.

“Alamieyeseigha laid the foundation and his achievements still dot every nook and cranny of Bayelsa; even the re-designing and re-building of this cathedral (Saint Peter’s Anglican Church) was Alamieyeseigha’s legacy” Jonathan said.

According to him, Alamieyeseigha changed the state’s acronym from Pride of the Nation to Glory of All Land.

On his part, Gov. Seriake Dickson of Bayelsa described the late former governor as his pillar of strength, especially during his electioneering campaign when Alamieyeseigha served in different reconciliation committees to bring members of the PDP in the state and Ijaw people together.

He said that a major vacuum had been created by the demise and confessed that his campaign experienced its lowest moment when the death of Alamieyeseigha filtered into the state.

He lauded the people of the state who stood in solidarity with him during the 2015 poll and enjoined them to imbibe the character, virtues and forthrightness of Alamieyeseigha, whom he said was unparalleled and absolute toward the betterment of Ijaw people and the unity of all Nigerians.

Dickson prayed that God should bless Ijaw nation with many more people like Alamieyeseigha that would stand and defend her integrity.

In his remark, Bishop Oko Jaja of the Anglican Church admonished the people to emulate Alamieyeseigha who lived his life as “a candle in the wind,” adding that he was a selfless politician.

Oko noted that Alamieyeseigha was God fearing and dedicated the state to God while he was in office as governor; and prayed God to grant the wife, Margaret Alamieyeseigha and the children, the fortitude to bear the irreparable loss.

Welcome to #HeinekenHouseLagos! Exclusive look at the first Champions Planet in Africa