France Makes it Illegal to Pay for Sex 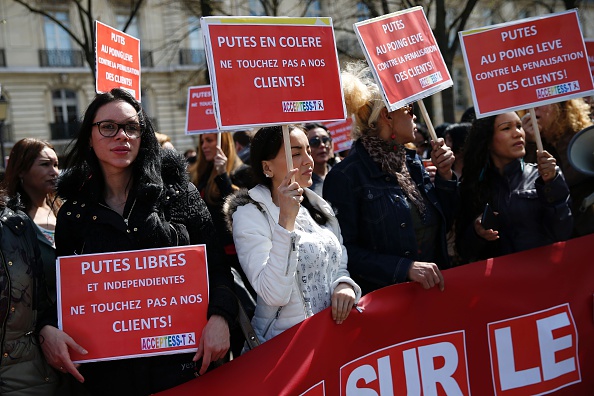 A protester (C) holds a sign reading “Angry prostitutes, don’t touch our clients!” during a demonstration by sex workers and supporters near the French National Assembly in Paris on April 6, 2016, as French lawmakers take part in a final debate on a bill that would make it illegal to pay for sex.
French lawmakers were poised on April 6 to pass a controversial law that makes it illegal to pay for sex and imposes fines of up to 3,500 euros ($3,970) on prostitutes’ clients.

France has made it illegal for people to pay for sex. The government will impose fines of up to €3,750 (£3,027, $4,274), and those who break the law will be forced to take classes about the tough conditions prostitutes face.

The move has been in contention for two years, according to BBC, because the two houses of parliament did not agree.

Some prostitutes protested the law during the final debate. As it is now illegal to pay for sex, they may be forced to go out of their way to protect their clients from getting caught, which may put them in more danger, critics argue. Many have reportedly been asked by their clients to go to their homes, as opposed to public or neutral areas.

Supporters of the law say it humanizes prostitutes as victims, and encourages them to come forward if they are being abused.

Outlawing those who pay for sex is becoming a European trend, as BBC reports –

Sweden was the first country to criminalise those who pay for sex rather than the prostitutes, introducing the law in 1999. Other countries have since adopted the so-called “Nordic model”: Norway in 2008, Iceland in 2009, and Northern Ireland in 2014.

Earlier this year, the European parliament approved a resolution calling for the law to be adopted throughout the continent.

Prostitution in France is not a crime, but now, paying for sexual acts, human trafficking, having a brothel and pimping are illegal.