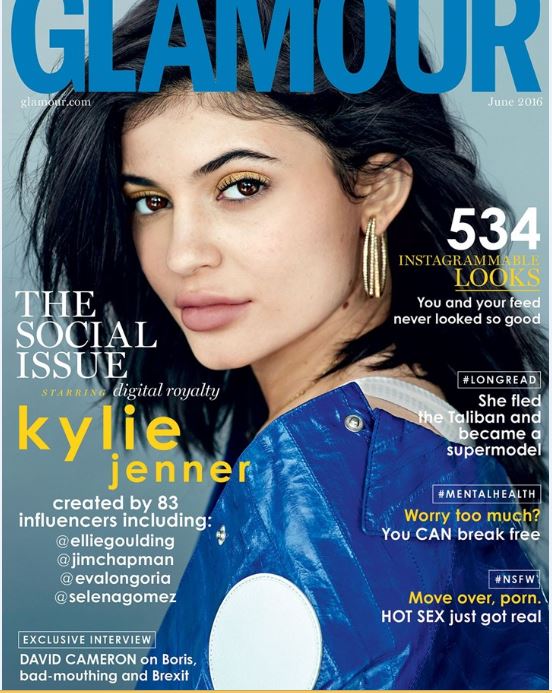 Kylie Jenner has landed her debut cover for Glamour UK and she looks amazing! The youngest of the Kardashian-Jenner family covers the magazine’s social media issue, which also stars Selena Gomez, Louise Pentland and Ellie Goulding.

She is due to outdo her sisters on Instagram by 2017 and to have her own “Discover” channel on Snapchat before the year is out and her hugely successful Lip Kits have helped her build up her own business empire. She also has three fashion collaborations, one with Topshop, another with Puma and also a project with her sister Kendall Jenner.

Here’s an excerpt of her cover story:

On making her own money
“I haven’t had a dollar of my mum’s money for five years,” she said in the June issue. “Ever since I started earning my own money, I’ve paid for everything: all my cars, houses, clothes, everything.  I like to know exactly what’s going on and I’m actually quite careful with what I spend.  We all are as a family.”

On Being A Feminist
“I do consider myself a feminist,” she says. “I’m a young woman, for one thing, and I don’t depend on a man or anybody else.  I make my own money and start my own businesses, and I feel like I’m an inspiration for a lot of young girls who want to stand on their own.”

On stepping out of the limelight soon
“I only show people what I want them to see,” she said. ” And in time, I think I’ll just slowly start moving behind the scenes.  The show has to end eventually, and I’m not going to leave until we’re done with it, but by 20 I want to have the whole of my cosmetics line out because that’s my primary focus.  I definitely won’t want to be doing anything else that would make me more public.”

You can read up the full issue interview here.