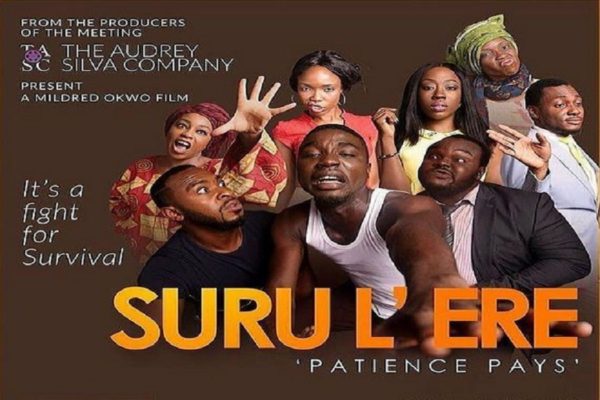 The film Suru L’ere, directed by Mildred Okwo, provides a reviewer with a rather unusual problem. Ninety percent of the film is watchable, enjoyable even, and every flaw in those parts, are excusable or even reasonable. This happens with many films and is hardly a problem. If you want perfection, go watch paint dry.

The trouble is the other ten percent comes at the end and negates all that has gone before.

Suru L’ere is about Lagos as it happens to one man. Arinze (Seun Ajayi) is a man working for the most deadpan cruel boss ever. He owes the landlady, who’s given to singing songs about his indebtedness, he owes the local medicine seller. He needs some sleep. He is living the meager life of a Lagos hustler. Except Arinze is no hustler. His boss Brume sums his plight: “…there’s no space at the top for lookers,”. When a comedy of errors presents him with chance to make a fast buck, he takes it. The only problem is he really intends to do the job given to him by the rich, lazy, beautiful Omosigho (Beverly Naya).

Nollywood actor Seun Ajayi doesn’t look like a leading man; his only star power is his smile. But he makes up for that lack with the quality of his acting. Good thing he is in nearly every frame. At first he is too good for the other actors. His boss (Gregory Ojefua) looks like a tractor and speaks like a robot. Beverly Naya doesn’t know what to do to hold a scene alone. The first problem is solved when you realise that his boss is indeed a robot, as driven by the same things as the robots working for him. (This is a sympathetic reading that the film will destroy later)

The second problem is handled in the redemption of Beverly Naya’s self-consciousness by the unlikely and yet present chemistry between herself and Seun Ajayi. They share a great romantic scene, which has to be the first time, in film or in real-life, where anyone falls in love over a plate of semovita.

As said, Seun Ajayi is not built like a star. What he has isn’t exactly an everyman-ness—it is an every-Lagosian-ness. Not the mannerism of someone who is going to conquer the city but someone who has been dominated by the city. Early mornings you can see both types of persons in any queue for a BRT bus. You know the guy who is sweating and looking in the distance earnestly? That is Arinze.

Seun Ajayi’s shoulders slump forward as Arinze walks in deference of his circumstance, and more than once he runs. Like every Lagosian he’s in a hurry. It’s excellent casting. You can’t see a Ramsey Nouah in the role. OC Ukeje perhaps—but in that case the unseemly attraction between Arinze and Omosigho, which is part of Suru L’ere‘s charm, would be gone. It is also why the explanation of the error that leads to their meeting isn’t believable. But then, to use a super-hero equivalent, that no one can tell that Clark Kent and Superman are same persons isn’t believable either.

Broadly speaking, the superhero movie and the comedy are working on the same premise: they are making a promise. The modern superhero movie asks that in return for the excitement of a showdown you hand over your disbelief. The comedy asks for your incredulity and connivance in return for a laugh. In other words: What works for superhero movies is an impending excitement; what works for comedy is an impending hilarity. Give me your disbelief, both genres say, and I’ll show you a good time. That exchange may be the entire basis upon which every fictional art is based.

What ruins that good time is if the joke doesn’t come off or the showdown is an anti-climax. Or worse: if the filmmaker reverses—proving the viewer a fool in suspending disbelief. This is what happens in Suru L’ere. In a bizarre twist the robot boss, whose deadpan face becomes useful to the film’s laughs, is revealed to have had some sentimental problem in the past. The experience transformed him. It is too easy and such a cliché that you want your disbelief back with interest.

After the viewer has accepted his character as a deliberate caricature, put in place to emphasize the inhumanness of Lagos, she is told that Boss Brume has a fragile heart. And because he is important to the plot, the core of the film’s comedic appeal is ruined. What has been attributed to the screenwriter’s expertise is revealed to have been performed unwittingly.

To re-use the superhero example: It’s like finding out that Superman isn’t the reporter Clark Kent but the office messenger. A charitable soul might say the goal is misdirection like with magicians. But a magician’s act depends on emphasizing his skill not pissing off the audience. For the latter to be taken in good faith, the former has to be beyond reproach. That doesn’t happen in Suru L’ere. It merely turns out that the audience was wrong to hand over disbelief.

From that point the film crumbles: A side-story involving an effeminate character (played delightfully by Tope Tedela) is dropped perhaps because the writer couldn’t quite figure what to do with it. Someone must have realized what was happening – that the film was going heavy when it should be light. Mildred Okwo’s earlier feature The Meeting played light. Writing about that film a few years ago, I noted that the true ground-breaking story would have been to make the considerably older character in that film’s central relationship female. But it didn’t have to. The Meeting was comfortable betting small.

Suru L’ere bets small as well. But you see the hands of a director reaching for something big when the material is content to remain small. You see the director abandon the bid for weight halfway and wonder why the attempt in the first place. What was advertised was a comedy, what we get is a rather simplistic morality play: lazy girl loses, fat guy gets a heart attack, poor dude gets cash.

Still, nothing is as irksome as the twist-that-ruins-everything, which has become a rather disturbing trend of modern Nollywood. No one seems to be able to make a good film out of a linear sans twist. Road to Yesterday embarked on a psychological twist. Gbomo Gbomo Express employed a thriller-ish one. Champagne applied a deranged one. Out of Luck used an incoherent one. Suru L’ere doesn’t quite use a conventional twist; it uses a narrative one. Like all of the others mentioned here, the use is questionable.

While everyone worried about Nollywood’s progress seem to have a tunnel vision for its aesthetics and production values, which are improving, there’s a troubling homogeneity taking place at the level of the story. Every film now wants to employ twists in the last third. Have all of our filmmakers attended the same film school? and yet, by how much can a twist be said to be surprising if every filmmaker uses one with minor deviations? Is it still a twist if every viewer is certain that around the hour mark, something predictably ‘shocking’ will happen?

“Drama,” says a character in Suru L’ere, “every family has theirs.”

“Twists,” responds the audience, “every Nollywood film now has one.”