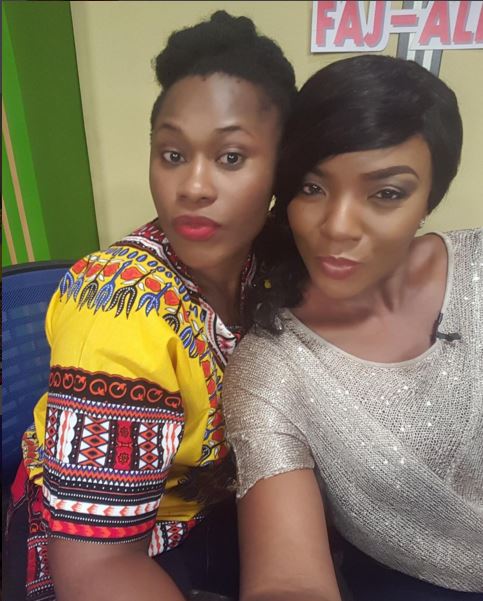 Chioma’s recent post on Instagram details a very emotional letter supporting her friend and also calling out those who came on her page to continue fat-shaming Uche.

I’m a bit emotional now but I’d try hard to drive my point home.I took my last post down just like I did another one a few days back all beacuse of the bashing you all come to drop on my page for Uche.

Uche is this, Uche is that. “Ha! Is that Uche? I thought that was a panda” . “Uche take it easy o!, diabetes is around the corner” . “Uche, marriage has dragged u down.” And it goes on and on and on…. Why if I may ask do u sit behind ur laptops and ur phones and throw demeaning words at ur fellow human being? And to think most of these hateful comments come from women who I think are full of bitterness themselves cuz it is out of the abundance of the heart the mouth speaks.Who died and made you Uche’s watchman?Did Uche tell u she doesn’t have a mirror in her house?Did she tell she doesn’t know her dress size has changed?Did she by any chance tell u Kenny is complaining ?Did she beg u for money to buy slimming tea and she pocketed the money and bought chocolates instead?Did u give Uche money to hit the gym but instead she pocketed the money and chose to sit at home and watch movies with bowls of caramel coated popcorn and a jumbo size soda??Do u know how many pregnancies she lost before #BabyMatthew came?Did u know whilst we were on a set, Uche was over 4mths gone with a baby she eventually lost? And that was not the only one? Do u then begin to think of the process her body has been through all these years?Do u all not just want to be human or u just feel better when u put the other down? What if @uchejombo were to be ur sister, aunt or some sort of relative, would u throw these kinds of comments her way?@okolimaureen @ckelzofficial ?Let Uche be! She was never a #Darego She has never been a slim person.Different strokes for different folks.The way lady A’s body reacts to the process of child bearing is different from that of lady B.Life is too difficult as it is already why make it worse for the other person? To what gain?#LetUcheBe ! Stop wasting ur time typing hateful comments #BeProductive. 1❤️” 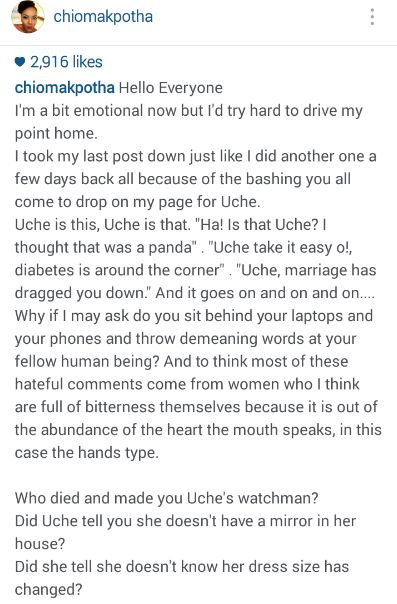 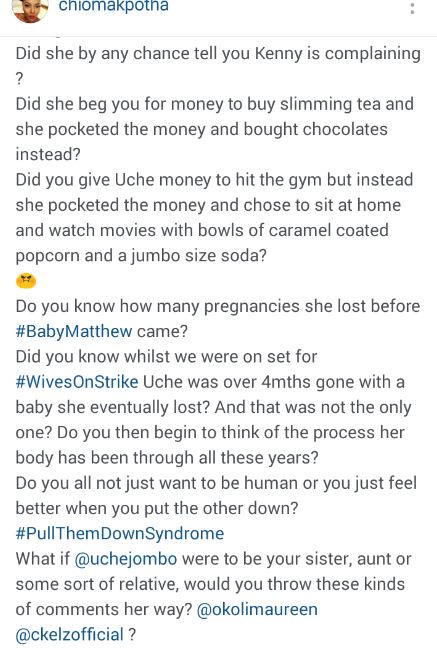 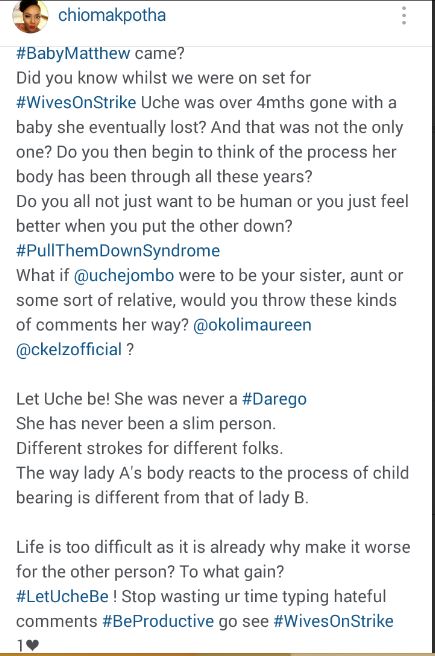