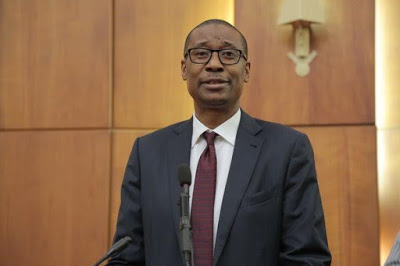 Speaking at the ongoing sectoral debate to find strategies to diversify the Nigeria’s economy, Minister of Industry, Trade, and Investment, Okechukwu Enelamah called on the National Assembly to review some laws and practices to provide for an enabling environment for industry, trade, and investment.

According to Enelamah, the Nigerian economy is more diversified than it seems. He said that the oil sector which has historically accounted for three-quarter of the government’s revenues and as much as 90 per cent of the foreign exchange earnings, actually contributes only 14 per cent of the Gross Domestic Product (GDP).

“We need legislative backing and intervention to reform some of the laws and practices that have been holding back our economy,” he said.

Some of the laws he urged the lawmakers to look into to were Company and Allied Matters Decree, the Railway Corporation, and Postal Services Acts.

The Minister also appealed to the National Assembly to fast track work on the Independent Warehouse Regulatory Agency bill. He also pushed for secured transactions in Movable Assets bill to unlock potentials for the Micro Small and Medium Enterprises.