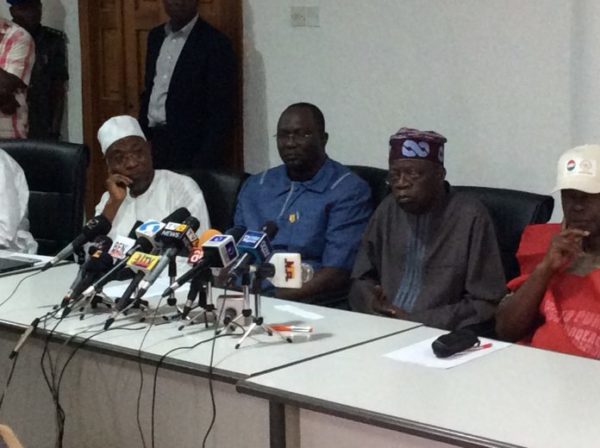 All Progressive Congress (APC)’s National Leader, Bola Tinubu, has urged the Nigeria Labour Congress (NLC) to shelve the ongoing nationwide strike over increase in fuel pump price in the country.

Tinubu said this when he led a delegation on a visit to the leadership of the NLC on Friday in Abuja.

He said that it was important for the NLC to call off the ongoing strike and return to the negotiating table.

What I want to say is for you to get back a little bit, even though we are aware of the division; it is just politics and there is always a conflict resolution system. Today, we are here to appeal to you, so that we can bring this country to a progressive path,” Tinubu said

According to him, the ideology of the present administration is about progressive governance that includes the welfare of the people and progress of a nation.

He noted that the progress being made by present administration depended upon the acceptance of the people.

He said the visit was to assure the NLC that they are not the enemy and would never be the enemy of the present government that is progressive.

“Why should we continue with this same problem? Why must we continue to do the same thing over and over again? this is an expired ideology and will not inspire new thing,” he said. “So, I am here to appeal to you to understand that whatever you are doing no, whatever this government is doing, whatever the President is doing, which involves myself and yourself, is for the good of all.”

“If change is our slogan, we want to keep collaborating and cooperating with making those progressive changes for the benefit of the people. We are trying to educate our children not to suffer the same problem that we suffered; we want to correct their future; we want to guarantee their future. I want to assure you that we will work for the betterment of this country; I also want to bet with you that this government will work and President Buhari will listen,” Tinubu said.

Responding, the NLC President, Ayubu Wabba, said the visit showed that the APC leadership was concerned about the welfare of the citizenry.

Wabba said NLC was open for negotiations on issues that affect the masses.

“The protest is not about fighting government policies but about policy engagement and the approach to it. This message will be communicated to our people and we will get back to you after the NLC National Executive Council meeting,” Wabba said.

Also speaking, Governor Rauf Aregbesola of Osun said that government was concerned about the welfare of the people.

“I want to appeal to you that we are not fighting for a different goal but the same goal which is for the good of the people. Though the techniques might be different, the purpose is the same; please shelve the strike and let us talk,” Aregbesola said.

In a remark, Sen. Suleiman Hunkuyi, representing Kaduna North, said the president meant well for all the citizens.

“Mr President is worried about this action and has requested and appealed that you should call off this strike for the good of the Nigerian people,” he added.

FG to Revitalise Lottery Industry to Make it More Productive