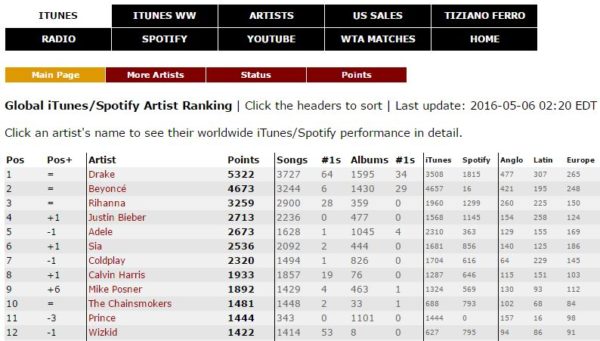 Drake’s ‘One Dance’ with Wizkid and Kyla  is currently number two on the Billboard Hot 100 and it can only get better after that! On the iTunes and Spotify Global Artist ranking, Wizkid is the 12th best Performing artist!

The singer comes in after an American DJ duo,  The Chainsmokers who occupy the number 10 spot. Drake, Beyonce and Rihanna take up the number one, two and three top spots respectively. Other artists that make up the top 10 global iTunes/Spotify ranking include Adele, Justin Bieber, Sia, Coldplay, Mike Posner, Calvin Harris and the late Prince.

More foreign collaborations are in the works for the 25-year old music star as Super Producer Sarz confirmed that Wizkid would be working with R&B artist Chris Brown and Nigerian-American rapper Jidenna.

Did You Know Stephanie Linus’ Younger Sister Chioma Okereke is a Gospel Artist? Listen to her New Song “Lord You Are”