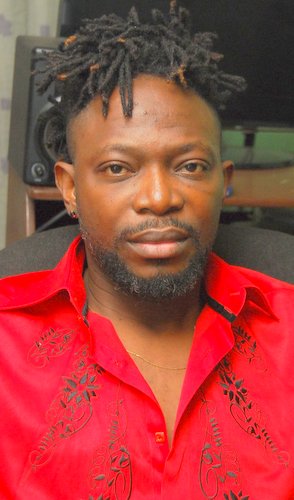 Ace music producer OJB Jezreel passed on this morning at the age of 49 but on Sunday he had an interview with NETng’s Adedayo Showemimo. The interview was done as part of his plans for a grand celebration of his 50th birthday in July. Unfortunately it was to be his last interview, with the 50th birthday just around the corner.

In the interview OJB talks about how he helped shape the Nigerian music industry, his health, his family and much more. The interview was held on Sunday, June 12, 2016 at OJB’s house on Gbaja Street in Surulere Lagos.

According to Adedayo, “I met OJB in his parlour. He laid on a bed right in the centre of the living room with his kids around him. OJB looked frail and was a shadow of his old bubbly self.”

On turning 50: Turning 50 was something I used to look at as an age that’s very far away, but here it is today. It just makes you see that the people that took the responsibility of fathering your generation at that time have done their part and it’s our turn to take over from them and take care of the next generation. That’s what I see, a lot of responsibilities because now it’s obvious that people will actually look up to you.

On how his transplant changed his view on life: Well, when the health challenge came, I won’t lie to you, I was a bit worried, but after the transplant, I started seeing things differently and I started seeing possibilities of living up to 50 and even beyond.

On his plans for life after 50: I hear most people turn 50 and say things like ‘I’ll get closer to God’, so I always wonder. Really, you don’t have to hit the age of 50 before you should get close to God, what if you don’t live up to 50? For me, there’s really nothing that’ll change. Like I said earlier, the only thing is the fact that you can’t be found competing with anyone. You should be more of the advisory person. You should let people know that there’s a ladder to climb, that there’s more to what they see. One minute you are at the top, the next minute it’s somebody else, and a lot of people have not been able to manage such situations. I just believe that 50 gives you an opportunity to be more constructive with your life. Some say life begins at 40, for some of us I think life actually begins at 50.

On if he has regrets: Looking back, I see no regrets because I see things from a more spiritual point of view. I think it was destiny that led me into music, it wasn’t accidental. We might think we are the ones orchestrating it, but there’s a higher force. If I had the choice to choose another career path, I’m sure it’ll still be within the entertainment industry. When you are younger you see a lot of regrets, but when you are older you see the regrets as things that shaped your life to become who you are and that’s what makes you an elder with experience.

On how he wants to celebrate his 50th birthday: I think the first thing I really want to do is to have a quiet moment with my family, because as you are aware from 2013 till now it’s been a rolling stone of challenges health-wise and for some reasons I’m still alive, so that day, I really don’t want too much noise and celebration. I just want it to be a day for myself, family and God. But after that day, we can turn up and paint the town all the colours you want (laughs).

On his family: Well, I have three wives and eight children. My first son is a graduate of Unilag, the second one is in her second year, my 3rd child is in OAU studying Mass Communication and the others are all still in school. I look at them and see them as my proud achievements not the Bentleys and Rolls Royce.

On his friends in the industry: It’s very difficult to mention names of loyal friends in the industry because I never set out looking for such people when I started. I was never conscious of such, that’s why I probably appear as a lone ranger. It’s as I grew older in the industry that I started to understand the value of loyalty. But people have always said Jazzman is OJB’s best friend. For me I’ll say we are more or less like brothers. We fight like brothers, we argue like brothers, so I think he’s about the only one with whom I’ve been able to take it beyond the regular industry friendship.

On how he reacts when he sees rumours about his death: Most people say when they carry such news about you, it means the person will have long life but me I don’t know about that one o. (laughs). The truth is, people feel there’s a trend, and they expect things to always follow that trend, so when it doesn’t happen that after 3 years he dies, people get shocked and such news always flies. So when I hear such news I never get bothered, but some times because we are all human, it gets to me and I get scared and when I have a little headache or stomach pain I begin to get extra worried but then it’s all good.