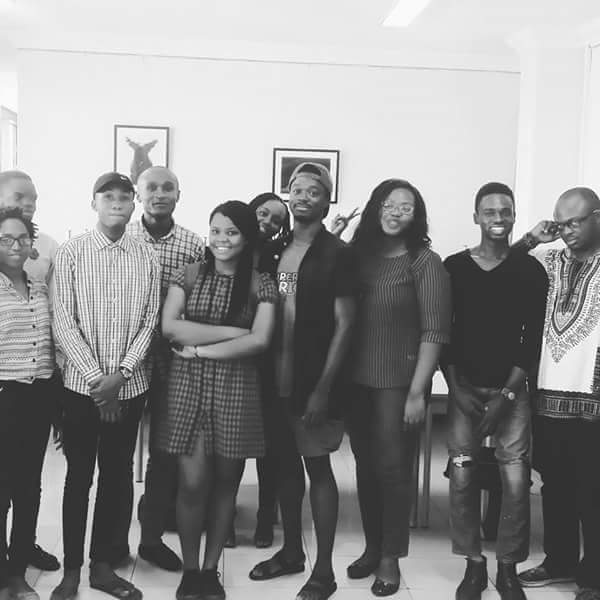 Last week, I attended the Short Story Day Africa’s writing workshop at the Goethe institute in Lagos. And in between free writing-writing without restrictions, writing about newer dimensions to old pictures with serene Fela music playing in the background, in that slender room filled with light and literature.

There was the session during which we had to piece scrambled phrases of the famous Warsan Shire poem “Home” into poems of our own.

“What does home mean to you?” Dami Ajayi asks after we are done with the session. Our facilitator, he is chic and urbane, probably reincarnated, the source of all Fela music and any other long-standing tune you can think of.

The room is silent for a while, silent and still, as if each person is trying to piece strewn versions of home together, far-flung versions and I feel as if I can hear the vehicles speeding along Catholic Mission Street. I most probably cannot.

Oluwabi is the first to speak. He says home is Jollof rice to him, Jollof rice and his Father’s cautioning. He is the participant that arrives latest and he saunters in picking the last seat at the table already occupied by Tochi, Dotun and Okwudili. 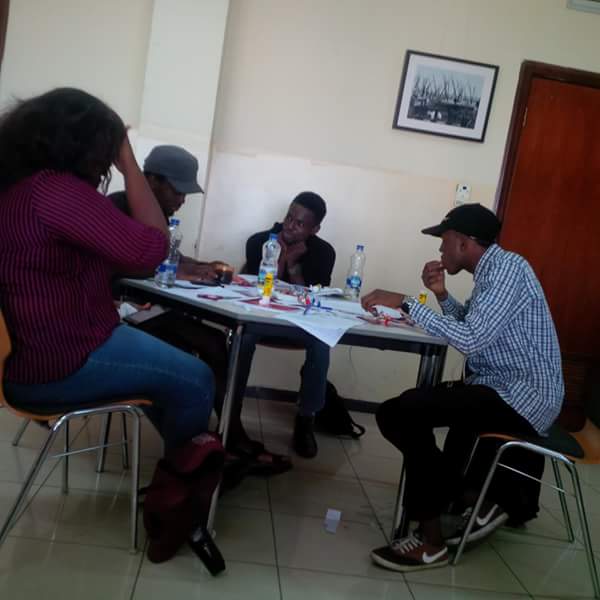 Edwin, Ope and Osisiye are on my table with me, warm and friendly, those ones.

For Ope, home is a place where the ghosts are familiar. I am staring beyond her spectacles and into her eyes as she says this, it is my own way of knowing how much recollections come with it. She goes further to explain her large family house having permanently locked rooms that no one entered and for some reason it reminds me of the home of Adichie’s protagonist, Kambili in Purple Hibiscus. “Whenever I get that chilly feeling, I know I am home”

“Someone once said home is a place where your phone automatically connects to the Wi-Fi” Dami jokes at this point and we all laugh again. Laughter is easily the only language we understand, besides literature, it is the language that connects us, ones frayed end to the other’s.

“Home is no more a place for me” I say, “It used to be you know before everyone started to go to school and all. My Mother moved early this year and that was the height. So home is really not Jollof rice for me or favourite meals, I decide what I want to eat these days anyway, it’s like school even”

Edwin speaks after I do. I am in love with his voice, I hear Jennifer tell him this later. During Lunch, he helped me bring a serviette although I forgot his name, giggled when he realised I had eaten all the chocolate left on the table. He hates The Fishermen and thinks the war theme like the opening line in Chinelo Okparanta’s novel Under the Udala tree was unnecessary.

We argue about this during lunch, I say, “The Fishermen is gold; every line is gold, every word, every punctuation” But not then, then I watch him gesticulate and flex his muscles as he speaks. I like him, but I do not tell him this.

And as I listen to Edwin speak about home for him being Watt-pad and this community of writers he has become family with, I realise that I, like Edwin, do not have a substantial version of home, nothing tangible.

Home is the evening wind that can never be caught by our palms; it is our favourite song turned inside out and the train that left the station too early. We will search for it in places where it once was but we would not find it, we will try to nurture it back to life, present its favourite meals, but it is wandering now, just like us, it is restless.

One of the recent memories I have of my Mother in Nigeria is of a rainy Sunday in 2015. We are walking to church together, us alone. Her scarf is drawn like a shawl over her head, her hands clutching her gold purse and she is speaking softly to me. She had just finished processing her travel documents and so we are talking about it, about what airport is more convenient for her in Maryland, about the rain, and about my trip to Aba the next month when we hear it, a scream, a woman’s scream.

The scream is at first mystifying because we hear it before we see the woman, in a flowing Ankara skirt and blouse my Mother would call “Up and down” because slowly it tethers into wails and because the woman is wailing alone, not in a group, not being comforted as custom with wailing people.

She is standing in front of a local hospital, beside the signpost that reads SASEUN MEDICAL CENTRE and she is wailing, a loud wail, interspersed with shakes of the head. Her hands move from her head to her sides in seconds, her feet stomps the floor in dire need of one to placate her and she mutters words I cannot hear.

Some of the hospital nurses are seated on the balcony indifferent of her grief, chatting about something, something more focal than her grief perhaps, more crucial, it is something they have seen countless times before and I imagine that earlier in their conversation they said to somehow nurse their guilt “Na she be the first to lose someone?”

There are people with us on that road, believers headed to church too, who look at that woman, add her to the scene of things that make Lagos weird and walk past. They would tell it to their families when they get home, a woman wailing without sympathisers and the listener would laugh before adding “Na wa.”

I expect us to walk past them too, like everyone else, in Lagos you do not pry in people’s business; they could be kidnappers or ritual killers or 419 or something. However, my Mother stops, uncertain at first, I know because of how long it takes for her hands to fly across the woman’s shoulder, because of how tenderly she says in Igbo “Aunty, what happened?”

I would realise later that the tenderness in her voice was familiarity, the conduct of one who had been where another was, of one who understood.

“My only Brother just died!” The woman says in Igbo too, “He is lying bare on the hospital corridor, they wrapped him like dustbin, he has outstanding bills, I have no siblings, no relations, no money, they want me to take him out the hospital soon, I don’t know where to take him to”

It is then the woman nods, thanks my Mother and makes her way back into the hospital. We walk in silence to church, my Mother biting her lips, tears welling in her eyes, looking keenly into the sky and back at the slippery road.

She is lost in her thoughts and I am lost in mine, with the rain drizzling in slender beads, I am learning the hardest lesson of a Son at that instant, I am learning my Mother is human, beyond doubts, beyond Parenting, and a fragile one too.

I do not know why I remember this whenever I think of my Mother, it is almost inconsequential even when placed on scale with the many years we have had together, there are more important things to remember. I do not know if it is because of the rain, because it captures a fraction of time before endless Skype calls and texts, because its triviality perhaps weighs more significance on it, the significance of little things.

But, when Dami Ajayi is reading the lines from Home;

You have to understand,
that no one puts their children in a boat
unless the water is safer than the land
No one leaves home until home is a sweaty voice in your ear
saying-
leave,
run away from me now

I realise that there are versions of home in us, copies, rumpled little pieces that we carry about, too little that they become barely noticeable. They are drowning in the turbulence of life and chance, surfacing sometimes to gasp for air to survive in us, but we shove them right back in.

Our favourite memories become beggars, sprawled on drab mats, hands stretched out, within the corridors of our hearts, depending on our soul to exist, on how much of them we are willing to let out.

Nevertheless, there is home in us, when we notice it and when we do not. When we bob our heads to oldies at Afropolitan Vibes, sing to God in church the next Sunday, when we make faces in our car mirrors, wind down our windows to let in the cool breeze on Third Mainland Bridge, and skip the stairs in twos to see a new movie at Ozone.

Home is the meek fellow in discoloured shirt and jeans at a house warming saying, “I’ll always be here, not disturbing your party, not impeding your life, but I will always be here”

I close my eyes at this realisation, tightly, restraining the tears, searching for the fellow in faded shirt and jeans in the corridors of my heart. I am scared Edwin will notice because he is looking in my direction and I close them even harder.

Reuben Abati: The Game Has Changed