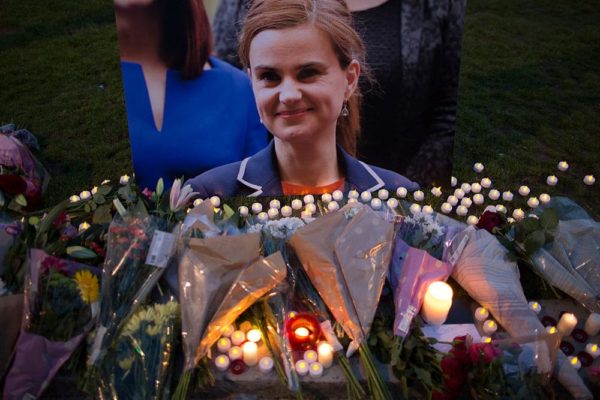 LONDON, UNITED KINGDOM – JUNE 16: Flowers surround a picture of Jo Cox during a vigil in Parliament Square on June 16, 2016 in London, United Kingdom. Jo Cox, 41, Labour MP for Batley and Spen, was shot and stabbed by an attacker at her constituicency today in Birstall, England. A man also suffered slight injuries during the attack. Jo Cox was reportedly shot and stabbed while holding her weekly surgery at Birstall Library, Birstall near Leeds and later died. A 52-year old man has been arrested in connection with the crime.

A man has been charged with murder in connection with the shooting of Labour MP Jo Cox, BBC reports.

Cox, was stabbed and shot as she was meeting constituents at a local library in Birstall, West Yorkshire. The attack came one week before Britain holds an in-out referendum on its EU membership.

Cox supported the Remain side, which, like the rival Leave camp, suspended its campaigning following her murder.

The suspect, Thomas Mair, 52, was charged with the murder of the 41-year-old. He will appear at Westminster Magistrates’ Court on Saturday and faces a number of other charges, including grievous bodily harm.

The police in Cox’s West Yorkshire constituency had reviewed her security in the last three months after she “faced a string of security threats” and received threatening messages.

Police say there is no known link between the threats and Mair.

Cox, who was married with two children, was elected to represent Batley and Spen during the last general election in 2015.

According to the report, before entering politics, she had worked for various aid organisations including Oxfam and the Bill and Melinda Gates Foundation.

Chief Constable Dee Collins said a 77-year-old man who was injured when he tried to save Cox remains in a stable condition in hospital.

Related Topics:Jo Cox
Up Next